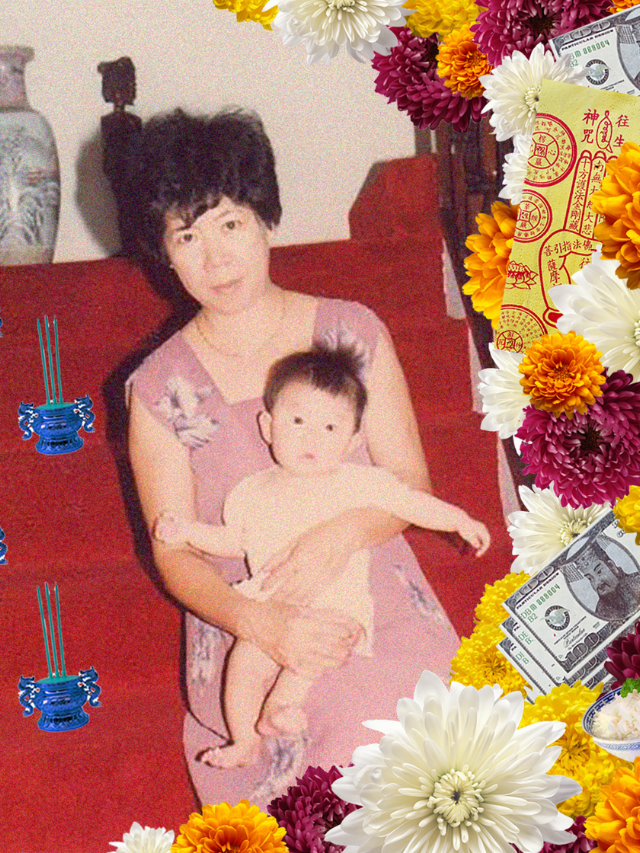 Equatorial Research Centre for Ritual & Ancestor Worship: on love when distance across realms is incomprehensible by Salty Xi Jie Ng

In this intimate piece of experimental writing, Xi Jie weaves together personal recounts and research findings to unravel the nuances of traditional practices and ancestor worship. Acknowledging that many of these traditions are passed down via oral sources and through practicing rituals, she probes deeper into their inherent contradictions as she makes sense of her grandmother’s departure.

*Hokkien (福建话Fujian hua) is a Chinese language originating from the coastal region of Fujian province in Southern China. Often referred to as a dialect, it is widely spoken by the Chinese diaspora in Singapore and other parts of Southeast Asia. Taiwanese is a close cousin of Southeast Asian Hokkien. 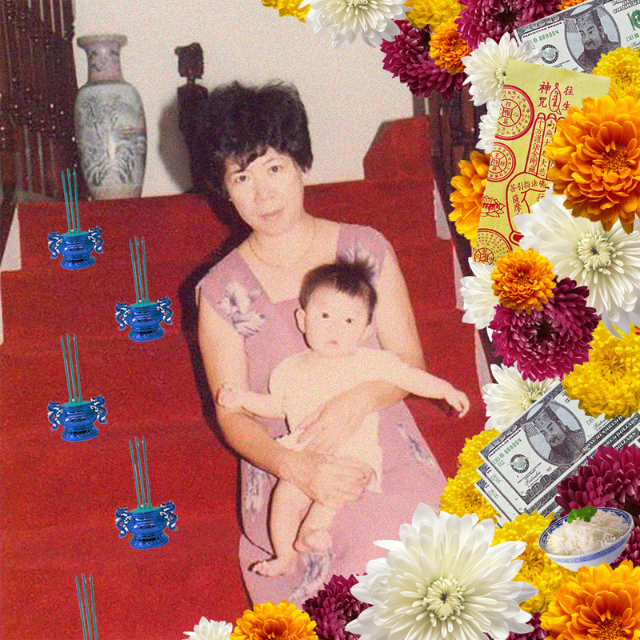 i. SITUATION, or the beginning after an end

It’s been 167 days since you left the life we are still living.

woon dih jid dao, lih dih hid dao, dan see hid dao si do lo?
we are here, you are there. but where is there?
this distance is incomprehensible

wa eh hokkien wei jin ho liao hor?
my hokkien is good now, right?
the last time you were able to talk, you spoke only in Hokkien, i was with you, i was thankful, my tongue

三魂七魄: When a man dies the seven spirits that preside over his seven senses die with him, but his soul survives and lodges in three places. One soul ascends to Heaven to enjoy the delights of Paradise, one soul stays in the grave to receive the sacrifices in its honour, and the third soul remains with the spirit tablet in the ancestral shrine, where at regular times throughout the year, members of the family meet to perform the customary rites of ancestor worship. TTBW

(.) I’m looking for all your souls and did one ascend? I want to find all the fragments of you, not to piece you back together again, because that would be impossible, but just to be able to say, my paternal grandma, my closest relation, my Mama, is there and there and there and there. Never really here again. But all the many theres that I can name even if I cannot go. <>

In The Interpretation of Social Reality, Max Weber wrote: “Concrete life situations…would push human beings to resort to accessible and tangible means such as magic or rituals in order to solve the immediate problems of existence…the performance of rituals is inherent in human existence and not necessarily dependent on social structures per se.” Man’s search for solutions will continue to be multi-dimensional. RM

(.) My theory: one soul in heaven (*angmoh or Chinese or general), one soul in your urn at Kong Meng San Phor Kark See Monastery (the mega Buddhist temple in Bishan which we call KMS), one in your ancestral tablet at Singapore Buddhist Lodge (Gu Si Lin in Hokkien), one at the shrine I made for you in your room, where four cute little bones I picked from your cremated remains rest gently in a tiny porcelain box waiting for bones from your husband, my grandfather, after his exhumation.
*The Hokkien slang for white person, literally meaning “red hair”

(The foundation of the shrine is your 40-year-old glass bedside table. The box, swaddled with lavender-coloured paper stuffing from Thomson Plaza, is in the smallest Tupperware the size of your palm, with a photo of you pasted on it—you’re in an evening gown, fat wobbly arms over your head forming an arc, a big obliging grin plastered on your face. Is it funny that this is where you are resting in your room? Right next to the worn out IKEA armchair on which you sat and dozed off to TV every night, your double chin spilling out across your rose powdered neck. I still say goodnight to you here every night before I sleep.)