Can You Hear the Fungi Sing?

Homegrown experimental band The Observatory presents REFUSE, an inter-media exhibition created with a team of local collaborators, including an unexpected non-human collaborator: fungi. They chart a new path in music-making by creating with this living organism for the very first time. The resulting act of "de-composition" sees the band question authorship in creation and sheds light on their evolution over the last 20 years. They share more about the exhibition and the ideas that mushroomed with it.

REFUSE is a collaborative project born out of the efforts of multiple contributors, including Bewilder (mycology design), Sai aka Chen Sai Hua Kuan (scenography installation), Ujikaji Records (archive arrangement), Chris Yeo Siew Hua (moving image) and Tang Fu Kuen (guest curator). Who are these people and why were you interested to work with them, specifically mushrooms?

The Observatory (The Obs): Every collaborator brought a specific skill and quality to the show. Sai contributed significantly to the scenographic installation of the space. Chris took on the challenge of looking for mould in a film through means of foraging. Mark from Ujikaji Records flipped our archives around. Kiat and the Bewilder team worked overtime dealing with how to realise some of our crazy ideas. But the biggest collaborator is probably the fungi, which we took the most time to understand and research. There probably was a reason unknown to us, how we came to collaborate with it. Perhaps the fungi were orchestrating this all along, leading us to them in some way. As humans, we always assume that we are the ones interested in others. But there is also a larger possibility that the fungi were interested in us and were finding ways to get us to meet. Fungi likely existed before any other living species, so it became obvious to us to use this analogy to trace and understand our origins. One of several fungi installations designed by Bewilder for REFUSE. Each is set against a scenography of recycled pallets created by Sai.

The mushrooms on-site generate a soundtrack through bio-sonification, where the bio-rhythms of living organisms are turned into sound with technology. What was the process like turning mushrooms into musicians?

The Obs: We suspect that it is probably erroneous to think that we turned mushrooms into musicians. Perhaps they have always been expressing themselves in various ways, but as humans, we have not attained cognisance or awareness about it. As collaborators, we would like to think that we might have facilitated their expression.

The human species would not exist without fungi, so maybe the hypothesis that fungi turned us into musicians should not be ruled out.

Mining the bio-rhythms of the mushroom is us going back to the primal roots of sound, possibly. We are entangled. In a similar analogy, researchers have noticed that some ant species cultivate fungi to help them break down their food to eat more easily. But perhaps it might also be true that the fungi are actually farming the ants to constantly bring them food to eat. 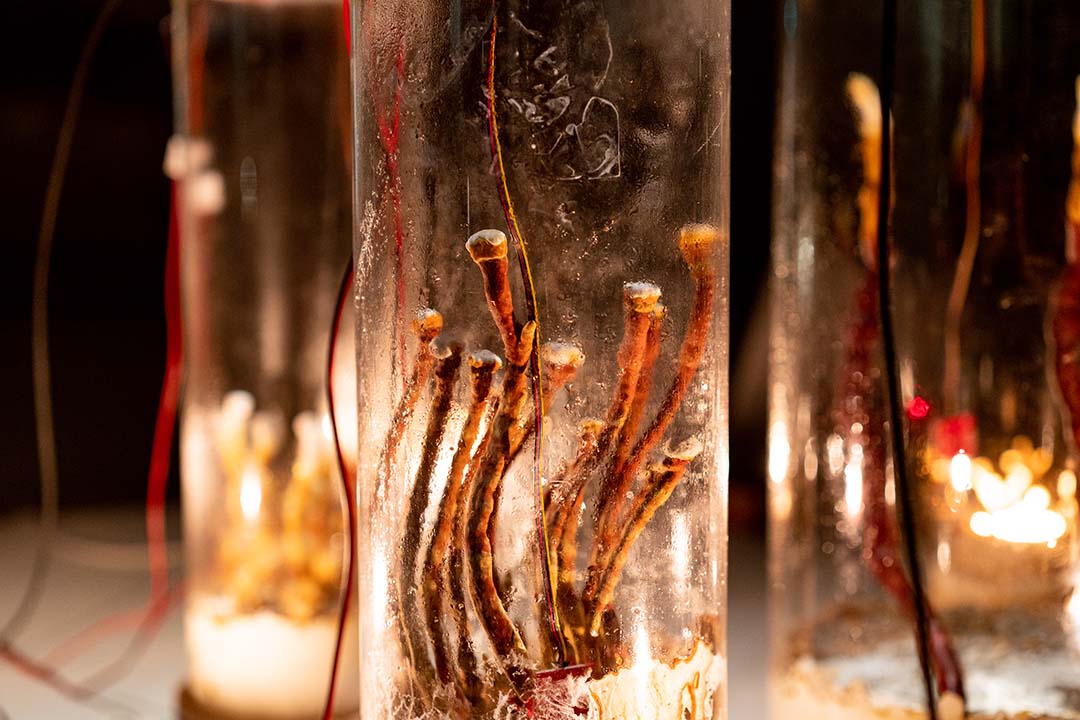 As the fungi give out carbon dioxide and moisture in their life cycle, they trigger instruments around the exhibition that “remix” songs by The Obs.

What were some surprises that emerged during the making of the exhibition?

The Obs: Our discovery that exposed living organic materials are not allowed in museums and the concept of ‘mushroom intelligence’.

We also discovered various things along the way which aided Kiat in understanding mushroom growth and metabolism. We found out that it is possible to use mycelium as a sustainable material for replacing non-biodegradable products.

Observing the growth of mushrooms has really taught us that they practice intuition and instinct much better than humans. 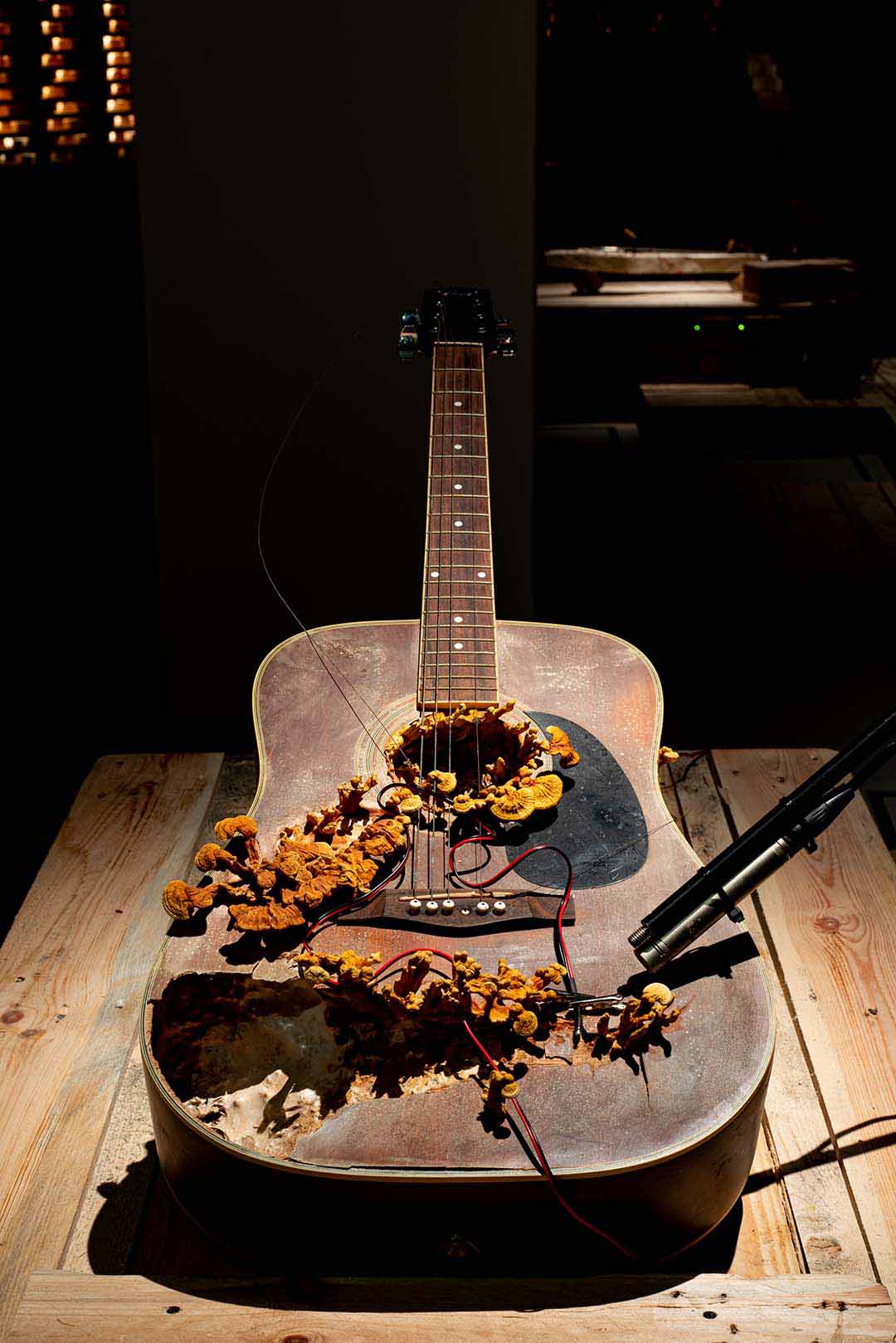 The fungi at REFUSE interact both sonically and physically with the exhibition as seen in this guitar growing with mushrooms.

How has the collaboration transformed your views of nature, biology and music?

The Obs: We have become much more aware that everything is interconnected and interlinked. Each one of us is part of a much wider network. We can imagine each of us as a tip of a hypha (the structure of a fungus), living our lives but what we individually do impacts the others significantly. But we are all part of a whole.

Dharma has also felt for the longest time the link between nature and music. REFUSE  has further emphasised this entanglement of surroundings and music within his living, ageing being. 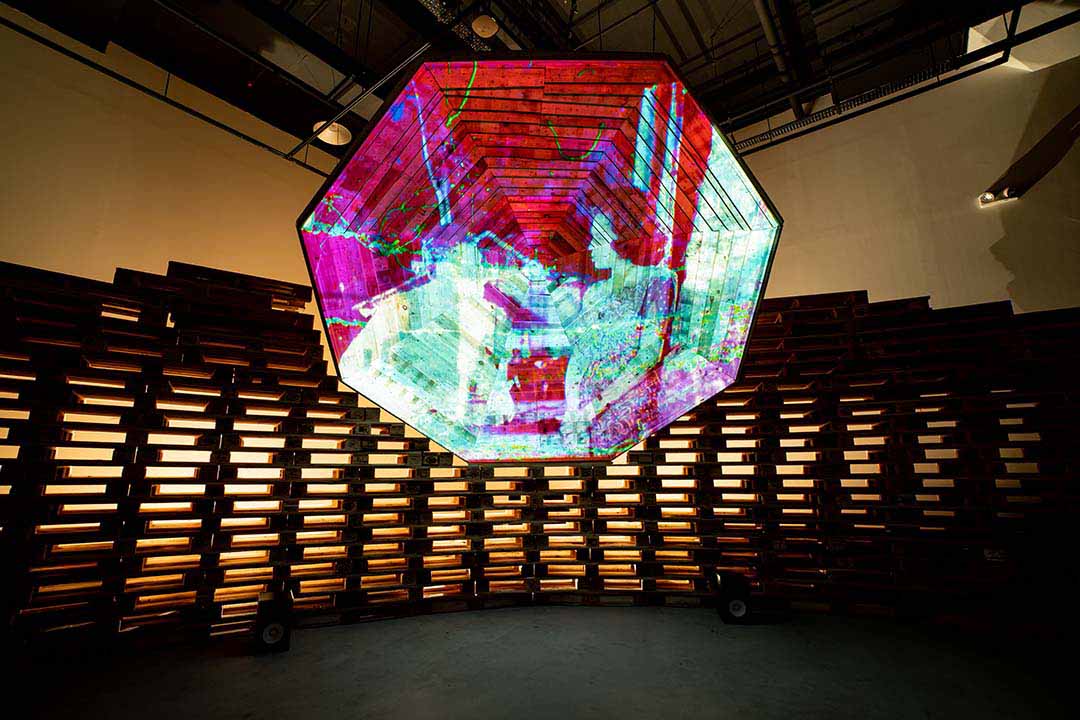 Fungi not only shape what listeners hear at REFUSE, but also the film projections that Chris created using old Cathay-Keris film archives that had been damaged by mould.

As we researched deeper into the world of fungi, we realised how their importance to the ecosystem has been neglected. In fact, our research entrenched us deeper into ecological discourses, which encompass the colonial and capitalistic exploitation of nature, environmental histories, the garden city, climate crisis and the Anthropocene.

How might the exhibition title “REFUSE” speak of the band’s past, present and future?

The Obs: ‘REFUSE’ reflects on us and our network in a mycological way, how the past and present connects the band to the possible future. Being in existence for more than 20 years, we have had our share of members leaving to pursue their own projects. The band was also made up of members from previous bands from the ‘80s and ‘90s. This forms a network of musicians with varied influences (not just from a musical perspective) that has contributed in some way to the band’s works.

We see The Observatory as existing in this ecosystem of creativity and having the shared responsibility of acknowledging the past and inspiring the future, while we exist in the present, with presence.

The Observatory is probably in some sense, a fruiting body, like a mushroom, of a larger, vibrant, important mycelial network that exists underground. We will not be able to exist without it.

REFUSE  runs until 17 April 2022. Do also check out the accompanying exhibition publication featuring essays on The Observatory’s evolution, behind-the-scenes stories and more!