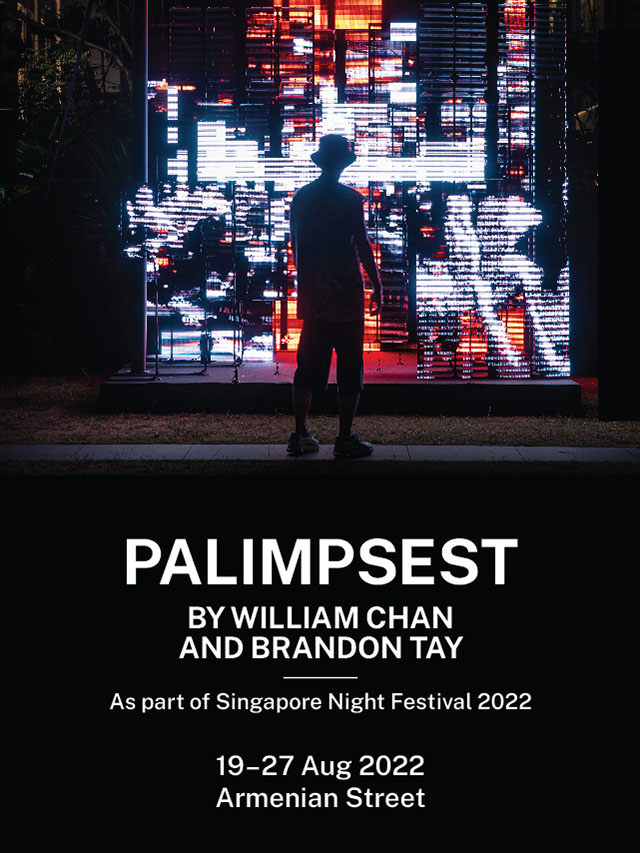 Drawing inspiration from the communities, buildings, architecture and art that once was on Armenian Street, PALIMPSEST is a poetic expression of the artists’ contemporary take into the history and evolution of the now pedestrianised street. This collaborative work by William Chan and Brandon Tay combines digital images, text and sound that celebrates the pulsating energy of Armenian Street – a site steeped in discoveries, experimentation, and discourse.

Comparing the evolution of Armenian Street to a palimpsest – a medieval wax tablet or parchment from which writing has been partially or completely erased to make space for another text, these multiple translucent screens can be seen as a series of connections, presenting the Street as a palimpsest both literally and metaphorically, inscribed with layers of meaning of “here and then” and “then and now”. Meanwhile, the deconstructed cube is a reference and critique to the “white cube” paradigm which alludes the move away from the traditional confines of the museum and art gallery spaces.

This artwork is co-presented by Singapore Art Museum and National Heritage Board as a programme of Singapore Night Festival.

William Chan is an artist, multi award winning designer, creative director and film and television commercial director. He is the founder of TMRRW, a multidisciplinary design and motion studio based in Singapore. Chan has worked on projects for MTV, Nike, Singapore Tourism Board, Tiktok, HBO and Meta. He is also a juror for the Creative Circle Awards and PromaxBDA award.

Brandon Tay is a Singaporean artist working between the fields of installation and the moving image. His projects are concerned with how agency is defined—in terms of culture, technology and politics. He creates CGI films and projection-mapping installations that draw parallels between these fields, depicting how similar principles in these disparate domains inform each other.