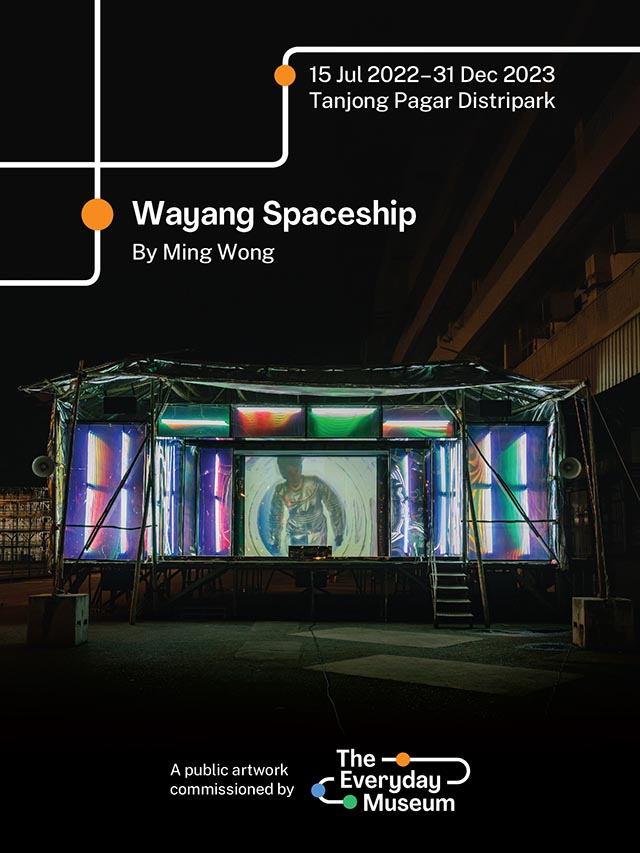 A Wayang Spaceship has landed on our shores. Alongside the industrial, technological and ecological crises that have taken place throughout time, it also stands witness to our place in the cosmos. During the day, the Wayang Spaceship is seemingly dormant, its reflective surfaces mirroring the bustling traffic around the container seaport. Its own inactivity is interrupted by the occasional stray radio transmission relayed from another dimension.

At dusk, the Wayang Spaceship reclaims its former role as a travelling Chinese theatre, illuminating the past, present and future with an operatic symphony of light, sound and image, as though it is livestreamed from the memory of a scholar-warrior, a time travelling consciousness who moves freely between the past, present, and future. Each day, after the Singapore Art Museum closes, the Wayang Spaceship activates with light, sound and film, allowing the public to commune with this solitary figure of Chinese opera.

The Wayang Spaceship will evolve over a two-year period featuring a range of performances and access programmes. It is commissioned by The Everyday Museum, a public art initiative by Singapore Art Museum, and made possible with the generous support of Sun Venture.

To find out more about the programmes and discover #ArtWhereYouAre, please visit

Dedicated to supporting artistic practices in public spaces, The Everyday Museum is a public art initiative by SAM and a platform for creative production and experimentation that transforms everyday experiences into meaningful encounters.

about The Everyday Museum

The Everyday Museum brings art to everyday lives and demonstrates the possibilities and potential of art and creativity for our society. Siting projects in publicly accessible spaces, these are artworks that will spark curiosity, activate imagination and ignite conversations, transforming everyday experiences into memorable encounters that offer new perspectives on life and society. Dedicated to supporting artistic practice in the public sphere, The Everyday Museum is a platform for creative production and experimentation, where every space is a cultural space, created for and with communities. Its diverse programming creates physical and virtual nodes for engagement and interaction where everyone can participate.

The Everyday Museum is a public art initiative of the Singapore Art Museum and part of the museum’s new direction of infusing meaningful art encounters into the everyday, inspiring change through art and collaborations.

The world of cinema is Ming Wong’s gateway to imagination. In many of his works, he subverts the role of the actor in order to reveal how gender, race, nationality, language, body type and other categories are always a form of performance. Sometimes Wong plays all the roles himself—even learning different languages to do so. Wong has maintained a particular interest in Cantonese opera, having grown up with it in Singapore. Since 2012, he has investigated the modernisation of Cantonese opera in the 20th century, its cinematic transformations and unlikely relationship with the development of science fiction in the Chinese speaking world. Alongside Wayang Spaceship, other works that address this theme include Windows on The World (Parts 1 & 2) (2014), Blast off into the Sinosphere (2014), and Scenography for a Chinese Science Fiction Opera (2015).

The latter was a work that invited the public to walk through a full scale hand painted stage set of a hypothetical science-fiction themed Chinese opera inspired by cosmological motifs from Buddhist cave paintings and Eastern Bloc science fiction movies. Wong represented Singapore at the 53rd Venice Biennale in 2009 with his solo exhibition, Life of Imitation, which won a special mention. The Wayang Spaceship at the Singapore Art Museum will evolve over a two year period, and will feature a range of performances and access programmes. www.mingwong.org