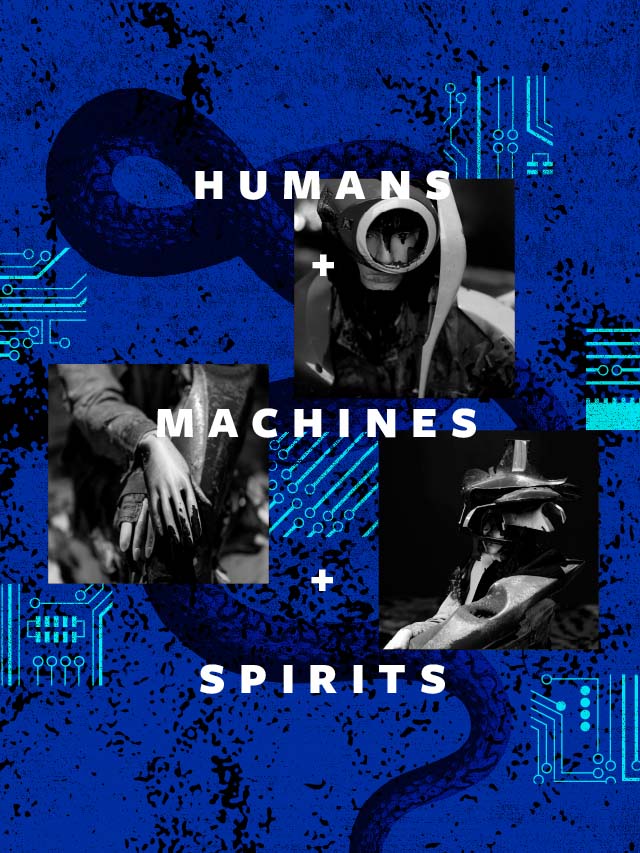 Welcome to a 21st-century Bangkok as dreamt up by US-based Thai artist Korakrit Arunanondchai where animistic energies and technology co-exist. Curators Chanon Kenji Praepipatmongkol and Syaheedah Iskandar take us behind the scenes of A Machine Boosting Energy Into the Universe that explores the togetherness of humans, machines and spirits The exhibition is centred around Korakrit’s video work, Painting with history in a room filled with people with funny names 3 (2015-16). What are the origins of this work and why is it significant in the artist’s practice?

Kenji: Painting with history 3 is part of a series of films that Korakrit began in 2013. The videos in the series might be described as an attempt at refracting the artist’s world through various media genres, from music videos to essay films. Techno-futurist speculation, animist narratives and autobiography are woven together from found video clips and footage that Korakrit shoots of his friends and family. Painting with history 3 stands out in the series as the first work that Korakrit filmed primarily in Thailand rather than in the US, marking a turning point in his practice as he became increasingly invested in engaging narratives of politics, religion and history across Asia.

The work was previously shown in several other locations. How is SAM presenting it differently?

Syaheedah: The unique architectural elements of SAM’s new gallery spaces at Tanjong Pagar Distripark determined the creative ways we could push the boundaries of a traditional white cube. The pillar in the middle of the gallery, for instance, became the scaffolding for the naga sculpture. The permanent feature enveloped by the naga – albeit hidden, had aided in accentuating the naga’s position and power alongside the video. The naga sculpture envelopes a permanent pillar in Gallery 2 of SAM at Tanjong Pagar Distripark.

The walls are also painted in a distinctive blue hue, never done before in past presentations.

As Painting with history 3 underscores our relationship with screen technologies, we wanted the blue hue to connect the work to the blue screen phenomenon, which appears in various forms through these machines, such as when there is a loss of cable signal or when machines are rebooted.

Tell us more about the “post-apocalyptic wasteland” that accompanies the video work. What are some of its key features?

The naga is made of e-waste and the room is painted in a blue hue, both symbolic of how intertwined humans are with machines.

Syaheedah: Reimagining materials beyond their original use and meaning are key features to reading the work as a “post-apocalyptic wasteland”. A direct example is covering the entire floor with bleached blue, pink and black denim, fueling the “post-apocalyptic” terrain with a synthetic effect. And then you have the main characters – the human-cyborgs and the creaturely-spirits – represented in the form of mannequins that are dressed in burnt-bleached apparel, with auto-parts becoming a part of their physicalities. The legendary naga comprises wires, tubings, and obsolete technology sourced from e-waste landfills. Chantri, the drone character from the video, and the equivalent of the celestial bird Garuda is furnished with humanoid features and drone wings. Korakrit’s use of these materials is a commentary on waste abundance today. It also speaks of a convergence of the physical and immaterial worlds given his thinking on High-Definition (HD) technology and how it may eventually surpass human sight.

There’s so much complexity and details going on in the exhibition. Is there one aspect or detail you hope the audiences will notice?

While Korakrit’s “post-apocalyptic wasteland” can be read at first glance as an alarming imagination of the future, his hope in our adaptability is what comes through.

Syaheedah: We can see this in the existential questions brought forth in his conversation with Chantri throughout the video. Absurd yet curious, these ‘illogical’ imaginings indicate an openness in making sense of the relationship between the physical and immaterial world as we grapple with the rapidly advancing technologies. An astute metaphor of how that harmony plays out is envisioned in the vitrine: the skeleton of a baby naga resting on a humanoid hand protruding with wires, which is, in turn, laying on top of a naga’s paw. Like a moment captured in time, the future in Korakrit’s vision is a poetic entanglement between humans, machines, creatures and spirits. The skeleton of a baby naga, humanoid hand and wires come together in the vitrine as a poetic metaphor for Korakrit’s vision of the entanglement between humans, machines and spirits.

Korakrit Arunanondchai: A Machine Boosting Energy Into the Universe is on till 3 May 2022.