In Search of “We” in Singapore

Between 1958 and 1963, Singapore departed from over a century of British rule to become an independent state as part of the Federation of Malaysia. The dramatic period also marked the golden era of Singapore and Malayan cinema as represented by six films that artist Jeremy Sharma has selected for SAM’s latest travelling exhibition, 'Slander!'. Sharma and SAM curator Kenneth Tay reflect on how the films by Singapore’s then major film producer, Cathay-Keris Studio, captured the politics and anxieties of an emerging nation.

The State of Singapore Act was passed with the successful completion of the all-party constitutional talks held in London. It laid the foundation of Singapore’s conversion from a British colony into a self-governing state.

The year also marked the release of Orang Minyak, (“Oily Man” in Malay) a horror film starring an ominous figure in dripping black oil who terrorised women in a kampung (village). 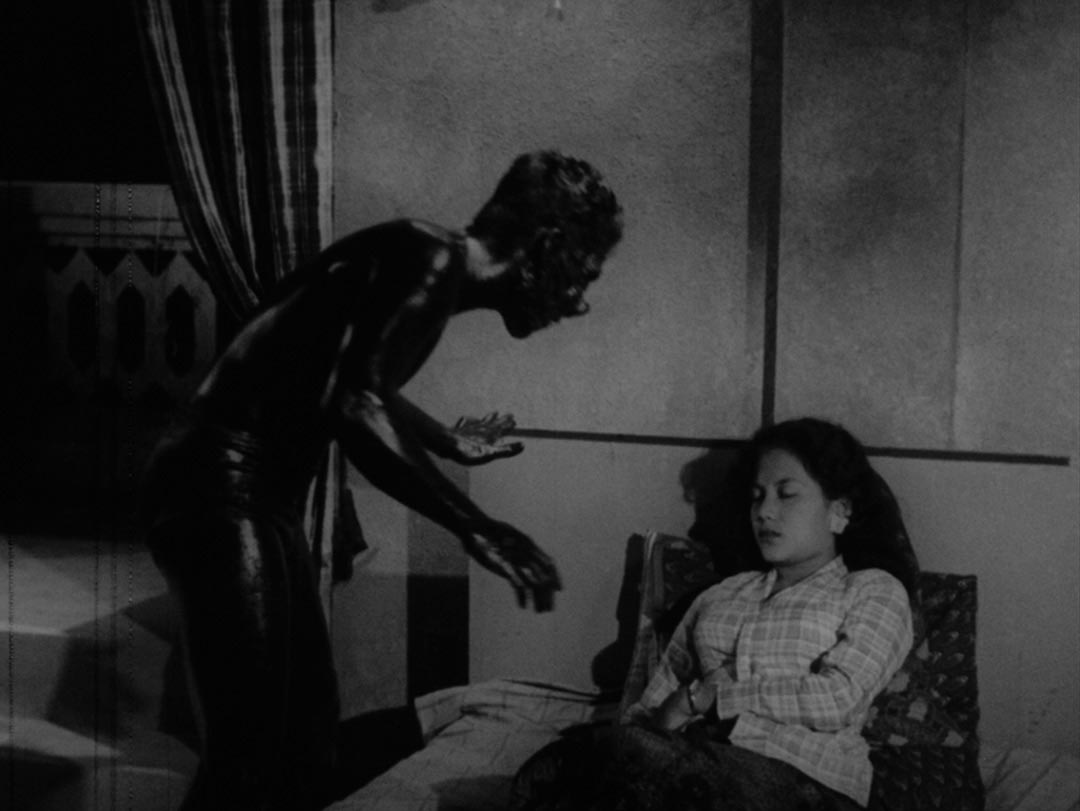 Jeremy Sharma (JS): I liken an Orang Minyak to a Frankenstein or bogeyman created by society. In this film, he symbolised all that was evil and unruly about the city from where the myth originated. I see him as the complete “outsider”. A key scene is precisely the one where he breaks into the bungalow to catch a glance of the sleeping Rohiah. He also represents things that are dark, unseen and thought to be unsavoury like oil and soot.

Kenneth Tay (KT): As an urban legend, the Orang Minyak really emerged at a time when Singapore began its rapid urbanisation. So you have oil and soot in the form of cars and roads being built across Singapore, sometimes threatening also to displace kampungs and their communities. I suppose we can read the series of Orang Minyak films, produced in that same year of 1958, as a foreboding sense of urban horror. I highly recommend Yogesh Tulsi’s wonderful essay “An Oily Mirror” for anyone interested in thinking through the Orang Minyak films of 1958.1


Singapore gained internal self-government after it held its first general elections in which all 51 seats in the Legislative Assembly were elected. The People’s Action Party won a landslide victory with 43 seats.

A major film released that year was Korban Fitnah (Malay for “Victim of Slander”). It retold the consequences of a malicious lie about Hussein having an affair with his sister-in-law. Not only did it break up his family but led to Hussein’s attempted suicide – a criminal offence in Singapore. 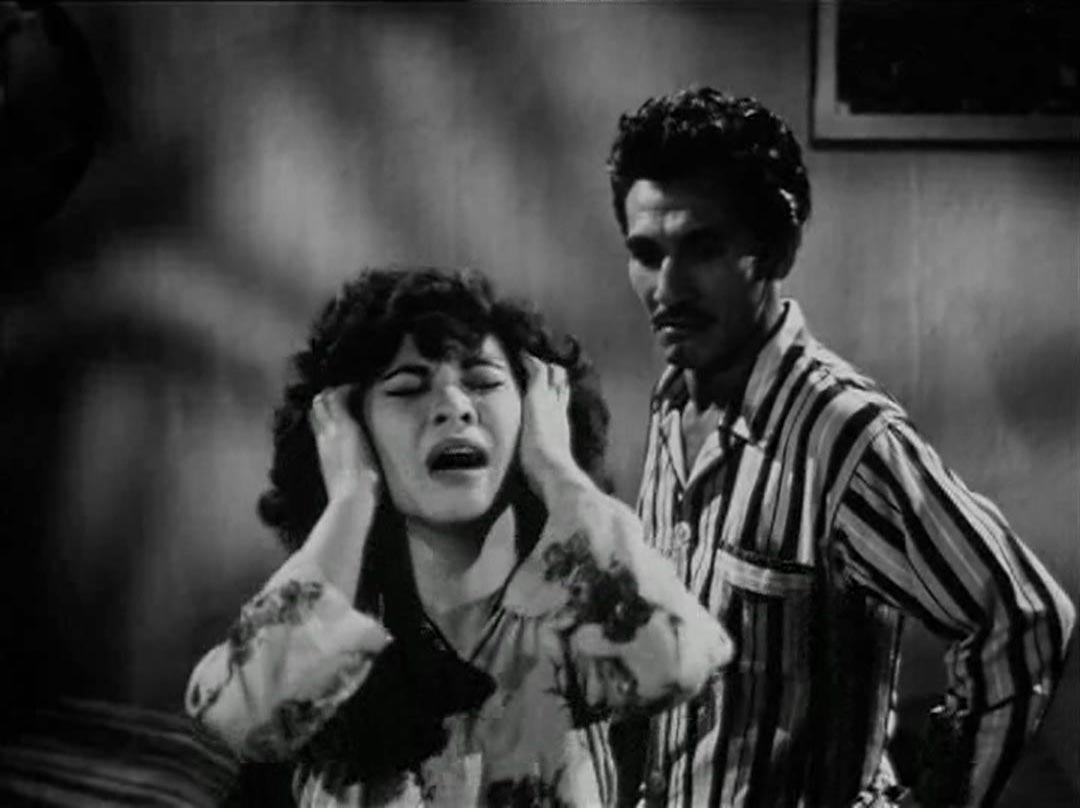 JS: The political implication for this film is how the modern legal system or the state encroaches into the personal. It governs our bodies, including what we can and can’t do with our lives. I was struck by the first incarceration scene which travels from Outram Prison to City Hall, featuring many apparatuses of the state. There are also locations that no longer exist due to rapid urbanisation.

My favourite scene is one where Hussein backs against a blank wall and faces the prospect of confrontation or suicide. Hussein’s brother, Hassan, also goes blind in the film. Academic Timothy Barnard identifies this as a trope that conveys the onslaught of modernity and the inability to envisage the ugliness within developing societal mores.2

Another major film released in 1959 was Rasa Sayang Eh, featuring popular singer-entertainer Wahid Satay. After falling for a charming female doctor, the couple was implicated in the pursuit of a secret map by two groups of gangsters.

JS: At the time, there was a strong focus on a Malay cosmopolitan identity – well-heeled/travelled professionals navigating the states of Penang, Kuala Lumpur and Singapore. By the end of the film, we still do not know what the secret map contains. I like to think it had something to do with state secrets and espionage.

KT: Singapore was very much the cultural and intellectual centre for Malay communities during this period. Hence, Malay films produced between the 1950s and 1960s also became a means to think through what “merdeka" (Malay for “independent”) meant, beyond the realm of formal decolonisation from the British. To cite Barnard again, merdeka was at the centre of these films, but the term encompassed cultural and intellectual independence.3 Despite the levity of the film as a romantic comedy, I prefer to think of the secret map as a larger metaphor for the future directions that a community was thinking about.

The transformation was captured in Lion City, a love story between a female factory worker and the son of a factory owner, which was set against the backdrop of a developing Singapore. 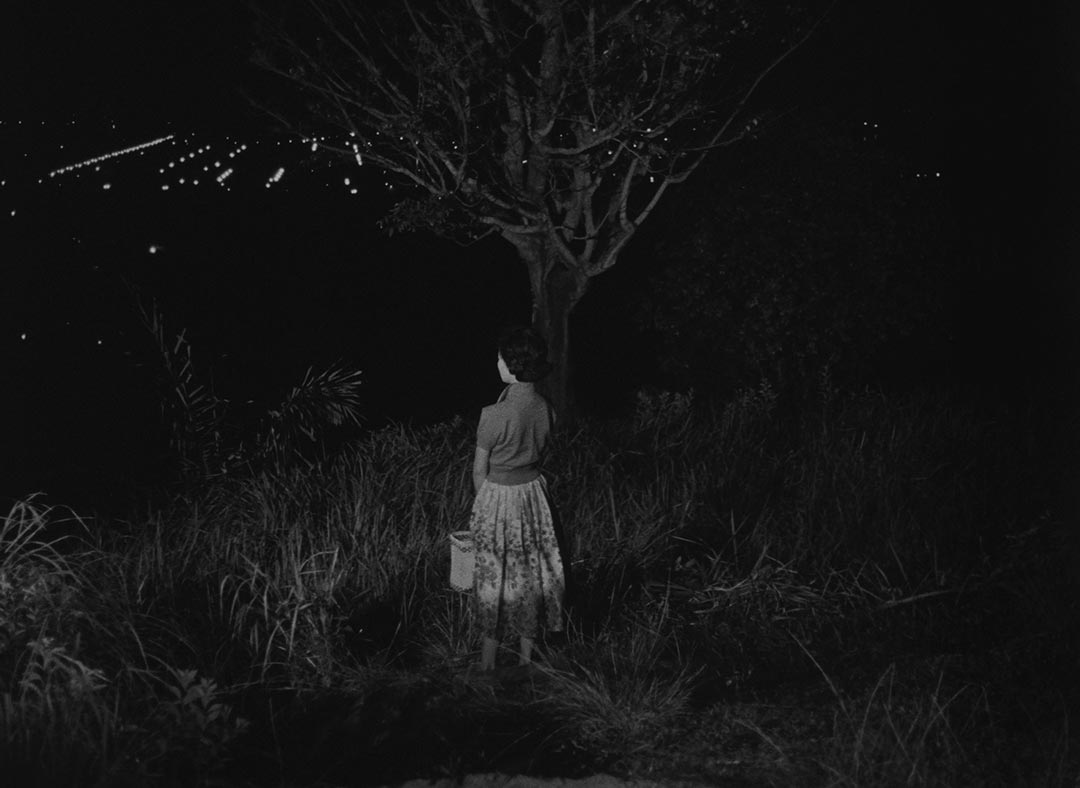 JS: That it was the first Chinese language film by Cathay-Keris speaks for itself. It was probably made for the dominant Chinese population and was shot extremely well. Did it have a bigger budget? The sensibilities and values of this film contrast quite significantly from the Malay ones. I thought many scenes hinted at propaganda and nation-building values.

I like the film for its more feminist take of the wilful young female protagonist and her relationships within different social classes. My favourite scenes include women working in the rubber factory and a very cinematographic depiction of the protagonist on top of Mount Faber looking at the city line at night. It recalls the Rückenfigur motif in German Romantic paintings. The name “Lion City”, which the characters refer to as well, also seems both a romantic and political imagining of the country.

Another 1960 film released was Che Mamat Parang Tumpol, featuring the protagonist, Che Mamat, who perpetually lands himself in unlucky situations. His first assignment after becoming a journalist was to track down the notorious Black Hand Gang, which he inadvertently gets into trouble with, and a wild goose chase ensues. 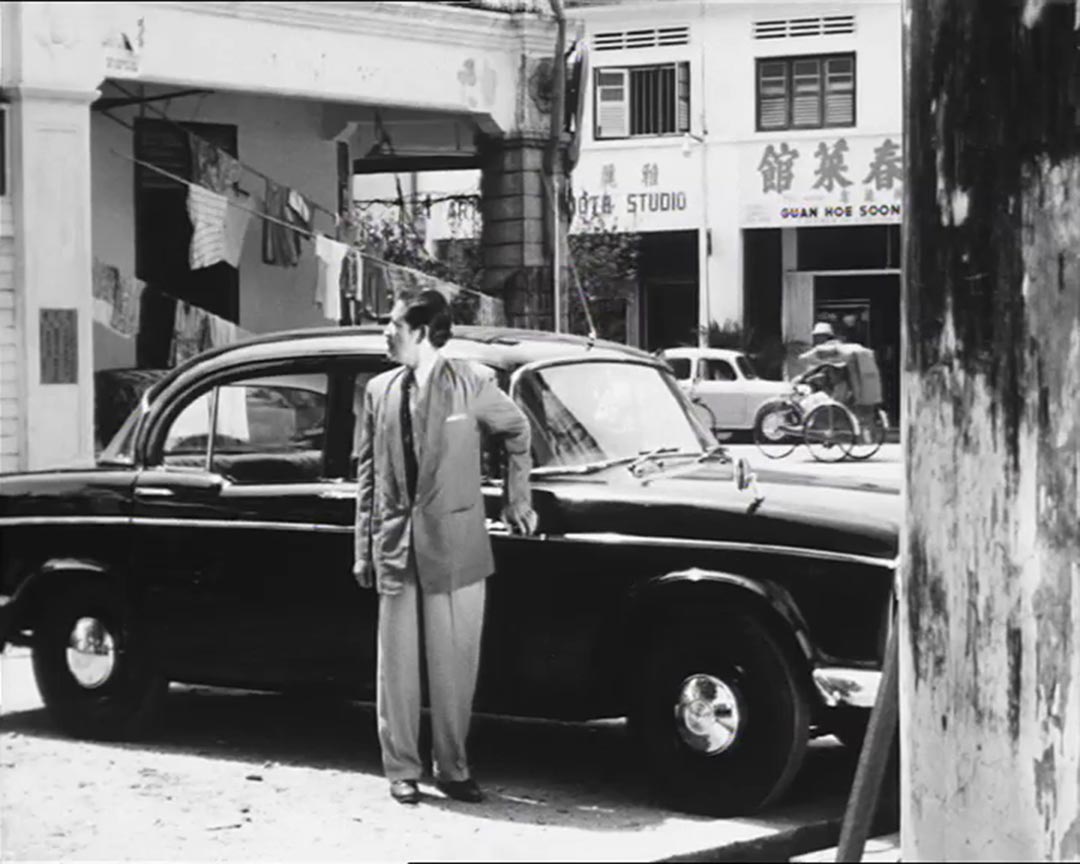 JS:The entire plot of the film is driven by the incongruent element of the lazy native/kampung buffoon in the city who triggers a series of related events. The incongruency also extends to having an automobile in a kampung by the beach. Always in this film, you have a contrast between an idyllic kampung and the modern, fast-paced city.

It also features a gung-ho Malay editor-in-chief who takes the law into his own hands by declaring war on the Black Hand Gang. This could be a subtle reference to intellectual freedom and print capitalism as well as the authority’s efforts to weed out Chinese secret societies. In this film, journalism combines forces with the entire military to pursue a small lowly gang. It’s hilarious.


Prime Minister Lee Kuan Yew survived a no-confidence motion in Parliament, and the leftist elements who were involved in the vote were expelled from his party.

Drama also played out in the cinemas that year with the release of mystery thriller Sumpitan Rachun. A detective and pathologist solve a robbery-cum-murder case involving stolen jewels, poisoned darts, villains masquerading as magicians and an alluring singer wanted dead for knowing too much. 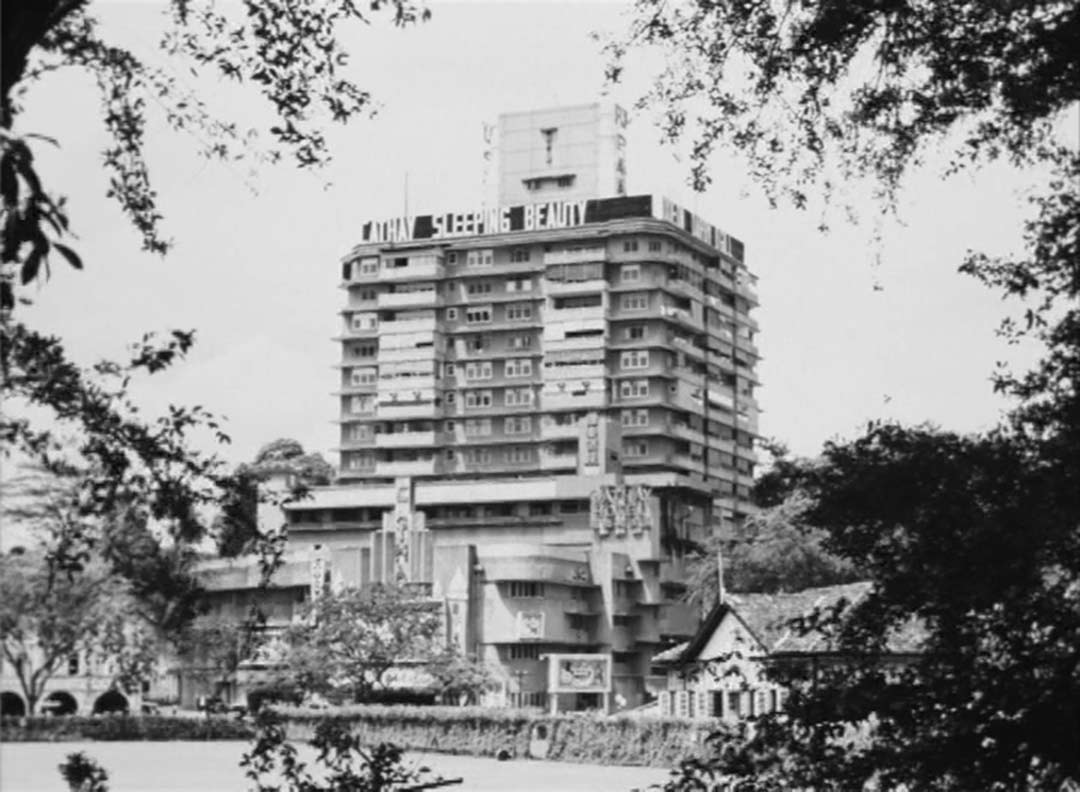 JS: There are allusions in the film to The Cathay, then the giant of cinema in Singapore as seen in its architecture. At one point there is a scene of the building with the billboard “Sleeping Beauty”. I love it. I feel like The Cathay was the “sleeping beauty”, about to give way to television.

I also liked the film’s multiracial ensemble of characters. The detective was played by a P. Ramlee lookalike (I take to be the standard of male attractiveness then), a dashing Casanova who dated both the attractive Chinese pathologist and the alluring Malay Singer. The villain was a scheming British magician disguised as a Chinese man (Insert all your racial and colonial metaphoric readings here).

The best scene has got to be the finale where there is an elaborate car chase scene. I like it for one thing: the mood of crime and deviance, when night takes over and everything gets unravelled. It is juxtaposed with the main villain who climbs to the top of the Cathay tower and falls to his death. So potent.

KT: Of course, we can also think about the significance of this British villain falling from the heights as a subtle reflection of the political mood in 1961. On the other hand, it’s also rather poetic that this fall from the Cathay tower – beautifully captured in a slow, moving shot – also foretold the quick rise and slow fall of cinema in Singapore. 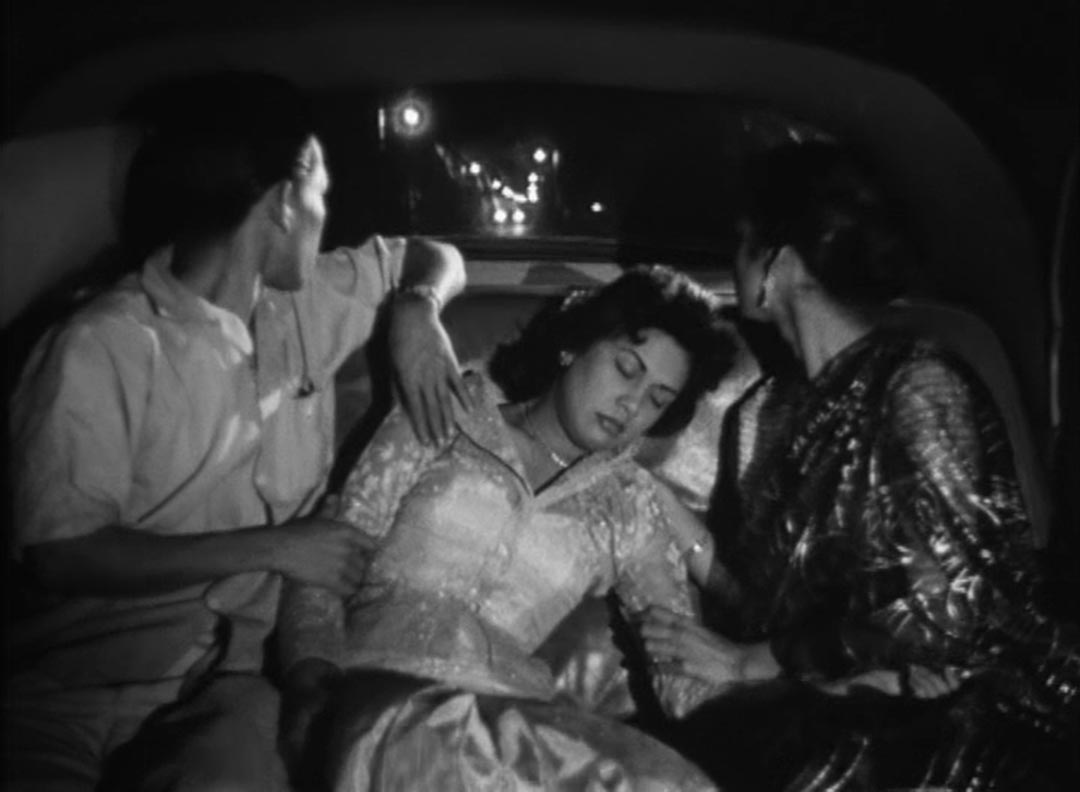 During this period, Singapore’s film industry also underwent seismic changes. New competition emerged in 1963 with the introduction of Singapore’s first television station as well as the arrival of foreign films. The formation of the Federation of Malaysia that year also ignited a conflict with Indonesia and resulted in a loss of access to the Indonesian market. As a result, Cathay-Keris began retrenching staff in 1965 and again in 1966. Its major competitor, Shaw Brothers, also closed its Malay Film Productions in 1967. Cathay-Keris produced its last film in 1973, and that marked the end of a golden era in Singapore’s film production.4

Travel back in time to Singapore’s nation-building years with Jeremy and these six films via 'Slander!', the latest edition of the SAM Mini Mobile Museum. The travelling art exhibition will make its way to the National Library Board’s regional libraries in Woodlands, Jurong and Tampines. Click here for more information.