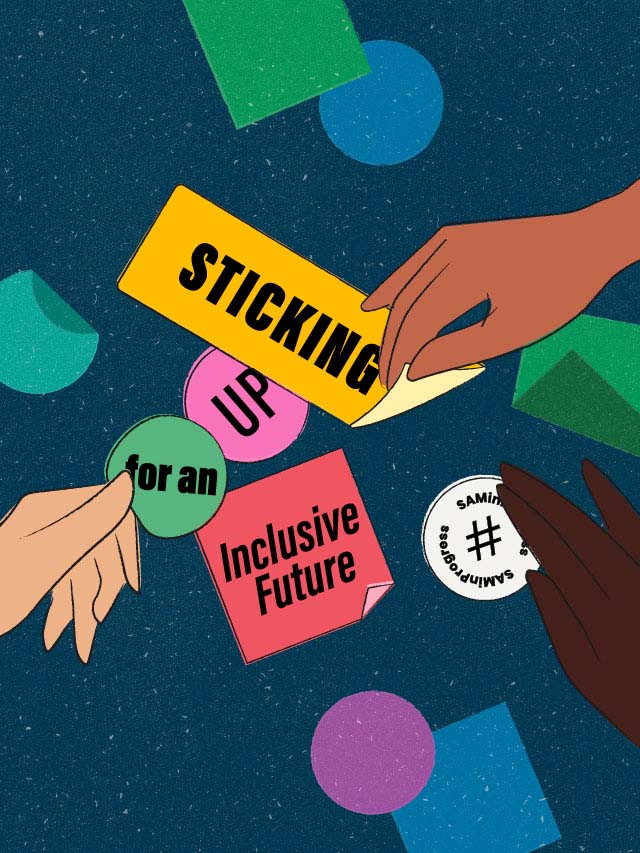 Sticking Up for an Inclusive Future

Since sparking a local debate in 2013 on Singapore’s definitions of art and vandalism (and earning the moniker “Sticker Lady”), street artist Sam Lo has gone on to create many public murals and installations for commercial clients and government agencies. For the SAM Hoarding Commission, Sam has gone beyond fulfilling a brief to expressing a personal hope for greater inclusivity in Singapore. The artist walks us through the colourful and unexpected elements that make up OUR FUTURE IS IN(CON)CLUSIVE (2021). 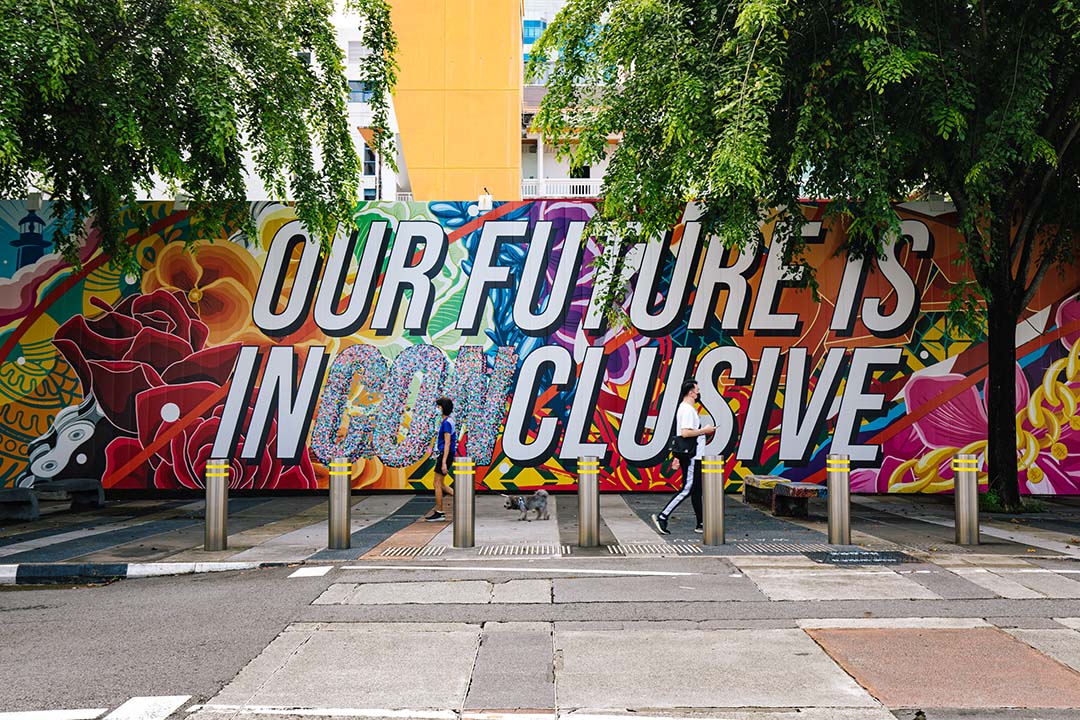 OUR FUTURE IS IN(CON)CLUSIVE (2021) along Queen Street.

Sam Lo (SL):The work uses many of my signature colours. I wanted the mural to be loud and vibrant enough to get attention and to celebrate the different communities in Singapore. When you look at it, I want you to feel happy — that’s the first thing. There are different elements that will be recognisable to the different communities. For example, behind the text are flowers that come in the rainbow colours of the Pride flag. Elsewhere, there are also batik motifs and a peacock pattern found in Indian fabrics.

When you look at the elements, I want you to feel represented, because all these things are intersectional. They are all related in some way and that’s why the work is a collage.

At the heart of the artwork is the message ‘Our Future Is Inconclusive’, which is emblazoned over a backdrop of flowers arranged in the colours of the Pride flag.

SL:In the last few years, we have seen a lot of polarising dialogue around sensitive issues such as race and gender. A lot of people ask why we are talking about all these issues. Why is it that we have them now when we didn’t seem to in the past? I think these issues have always existed, just that we’ve never talked about them in order to maintain our harmony. But we end up sweeping a lot of things under the carpet.

This mural being in a public space speaks to the masses in the sense that our future is not inconclusive just because there is so much going on, and it seems we are experiencing really bad times. What I’m trying to say is that it is a positive thing that we have to go through. We need to talk about the issues, deal with them and not disregard what people are going through. We have to acknowledge that we must unlearn things and make sure that society is inclusive and equal for everybody.

Birds are a recurring motif in Sam’s artworks, particularly the sparrow which is a street bird that represents the layperson to the artist.

SL: Birds are a recurring theme in my artworks and I usually use sparrows because they are street birds and they represent the layperson. The bird is biting on to an olive branch, so it is extending help in a way like how the different communities look out for one another. You could also see it as building a nest, which was actually how it started out in this piece. I wanted to represent the many migrants who have come to Singapore to build their homes. 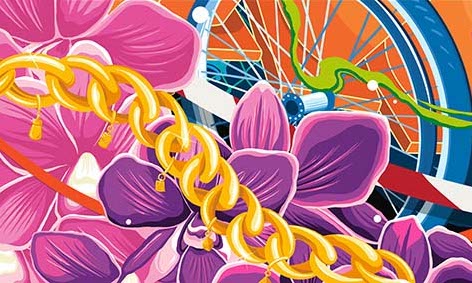 A juxtaposition of a gold chain, orchids and a bicycle in a section of the mural speaks of the inequalities in Singapore.

SL: The bicycle wheel and the gold chain represent the inequalities in Singapore. The bicycle is a form of everyday transport while the gold chain suggests privilege. They are set against orchids, which are commonly associated with the garlands that politicians wear. The gold chain also has different trinkets – milk bottle, a house, bills – that hang somewhat like trophies for the privileged. I wanted to highlight that it is not easy for everyone to have access to these things, especially low-income families. Audiences were invited to co-create the artwork by redeeming stickers to paste over the letters “CON”, which transformed the message on the mural to “OUR FUTURE IS INCLUSIVE”.

SL: I already had the idea of blurring out the “con” in “OUR FUTURE IS IN(CON)CLUSIVE” in my artwork concept when SAM mentioned they were thinking of a co-creation component for audiences to add stickers to it. I felt that it would really work with my concept as audiences could show their support by pasting stickers over the letters “CON” to turn “INCONCLUSIVE” into “INCLUSIVE”.

The work also contains personal messages that I’ve tailored for the different communities. They can only be seen on-site. I hope it can help them feel they are seen and not invisible so they can embrace who they are.

Stick up for an inclusive future and learn more about Sam’s mural at https://www.singaporeartmuseum.sg/art-events/exhibitions/our-future-is-inconclusive.