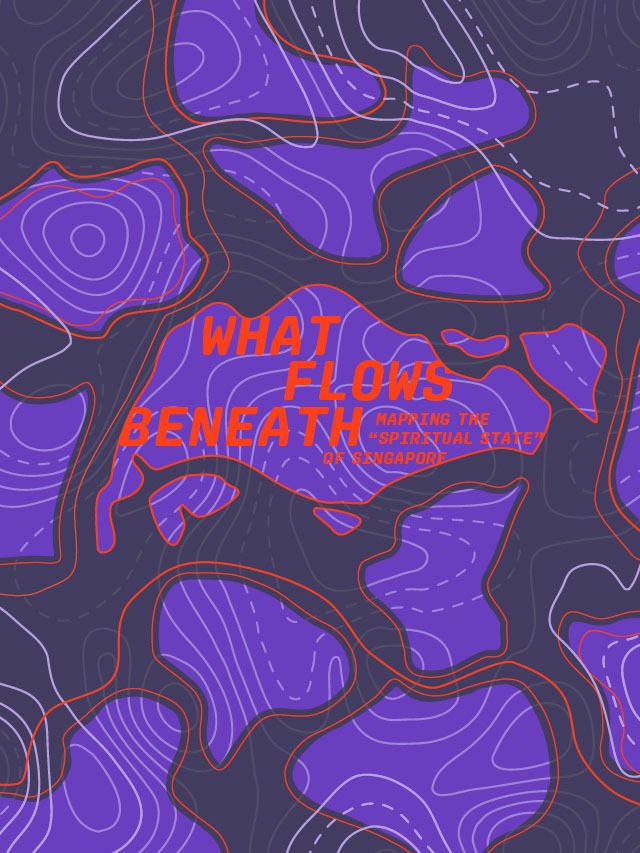 What Flows Beneath:
Mapping the “Spiritual State” of Singapore

What does the island of Singapore look like to you? For some, it resembles a crab, a geomantic image that is believed to have shaped the fortunes of the city-state. In a new work for SAM’s Lonely Vectors exhibition, artist-duo Zheng Mahler collaborated with architectural historian Ian Tan and One Bite Design Studio to explore this metaphysical interpretation. Find out more about the making of The Green Crab: A Diagram of Auspicious Spatial Organization. 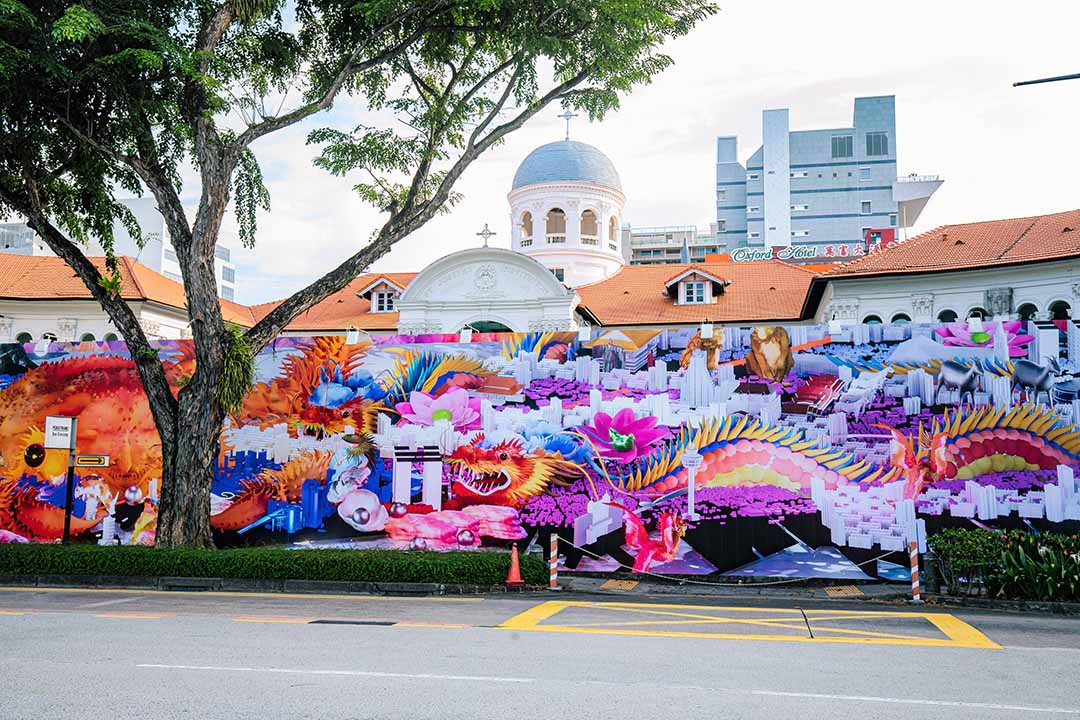 The Green Crab turns the construction hoarding around SAM into a map of the spiritual flows along the Singapore coastline.

How did this artwork come about and why title it “The Green Crab”?

The Green Crab is a speculative fengshui map that uncovers the figurative meanings behind Singapore’s natural terrain and manmade urbanscape. Fengshui symbols animate places by imbuing them with mythical origins and figurative attributes. This constructs both a sense of identity for an otherwise banal space and a form of metaphysical symbiosis between the terrain and those who believe in its beneficial and adverse effects on everyday life.

While the diamond-shaped island of Singapore has inspired many nicknames, few are as endearing and appealing as that of the “Green Crab”. The geomantic image superimposed over the island’s landform gave rise to our work’s title.

One popular anecdote describes the crab’s pincers and legs as corresponding with the east and west ends of the island; its head in the centre align with the water reservoirs and nature reserves, which are a green bank essential for Singapore’s survival; and its eyes match the Central Business District, which is the nation’s economic lifeline. 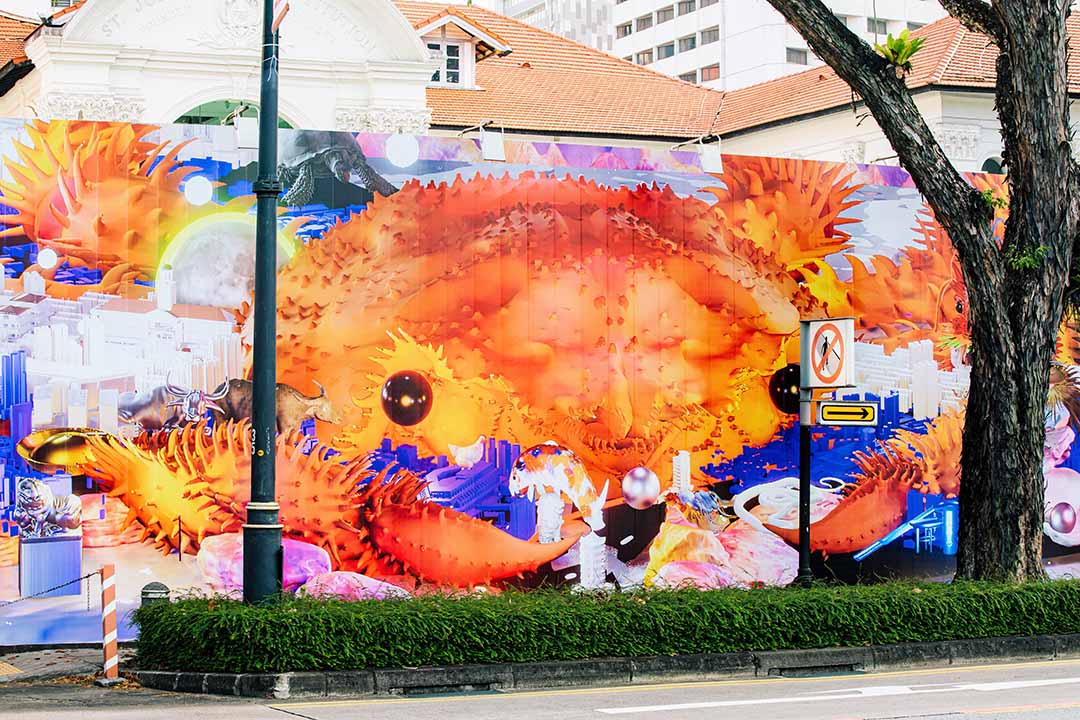 The crab is one of the images used to describe Singapore’s landform and is believed to correspond to the flow of its fortunes.

Although never verified by any fengshui master, a persistent rumour has it that the two pincers cover the coastal constituencies of Tanjong Pagar and Marine Parade. They were helmed respectively by Singapore’s first and second prime ministers, Lee Kuan Yew and Goh Chok Tong. Their eminence shares an analogous relationship to the potency of Singapore’s ports and airports, which largely determine the ebb and flow of its fortunes. As the society is largely driven by patriarchal values and state-planned developments, such a rumour on the ground attempts to rationalise the hidden workings of the government, albeit through metaphysical reasonings.

In what ways does this work “refute the critique of Singapore as an inauthentic and artificial built environment”?

The work refutes critique of Singapore as tabula rasa by exploring how geomancy principles may have guided state-driven urban development in Singapore and other parts of Southeast Asia, a legacy of Chinese migration in the 19th and 20th centuries.

The larger hoarding along Bras Basah Road pays tribute to this legacy further by reimaging Singapore’s coastline as a linear map, taking inspiration from navigation charts based on maritime expeditions led by Chinese explorer Zheng He in the 15th century (郑和航海图, Zhèng hé hánghǎi tú).

While modern cartography delimits Singapore’s physical boundaries as a representation of the city-state, this work situates the island in a larger regional topographical context and reveals the hidden qi that flows between Singapore and its neighbouring lands. This keeps the island in a balanced “spiritual state”, which is essential for its continued prosperity and mobility.

As your team and collaborators are based in Hong Kong, what was it like to explore Singapore through the lens of fengshui? How did it match up with your expectations or previous experiences of it?

One of the underlying constraints we faced was that the members of Zheng Mahler have spent very little time in Singapore. Daisy had visited 20 years ago, and Royce had spent all of two hours in the city on layover. We were heavily reliant on our Singaporean friends in Hong Kong to guide us.

The initial catalyst for the work came from a friend who mentioned to us the urban legend that the bagua shape of the old one-dollar coin from Singapore was inspired by fengshui principles. It led us to reconsider the city from a metaphysical angle. For a thorough urban, geographical and socio-political understanding of Singapore, we were entirely dependent upon Ian Tan, who is currently finishing his dissertation on a comparative architectural study of colonial Singapore and Hong Kong. 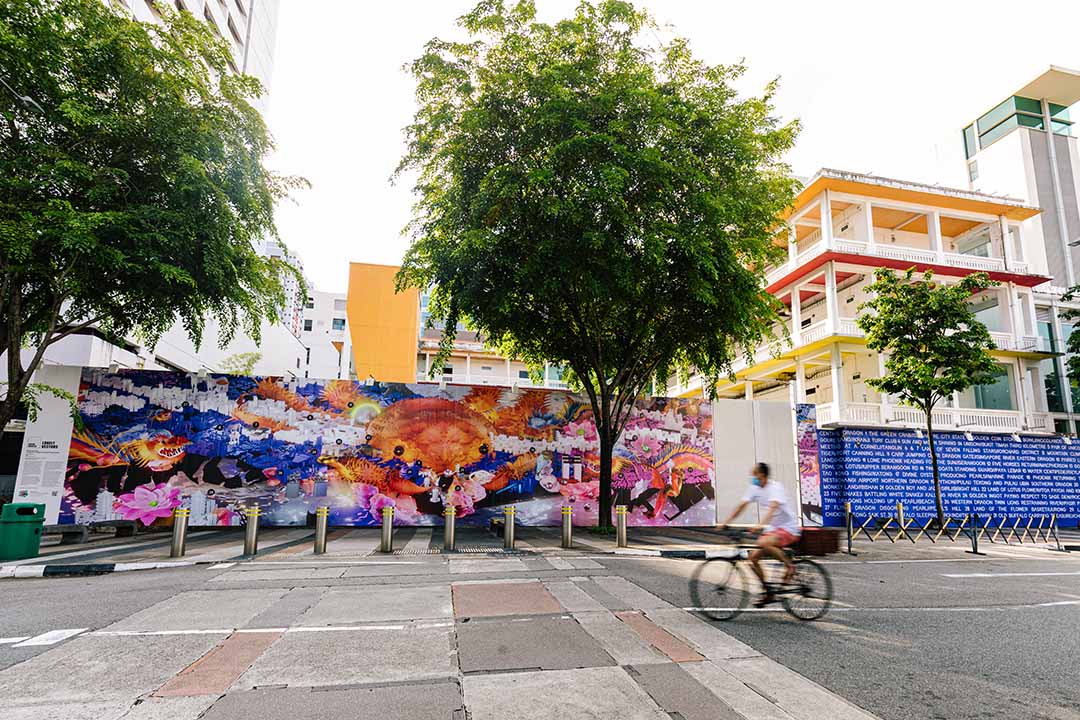 The artwork extends to the construction hoardings along 8 Queen Street where one can learn about the different spiritual flows in more detail.

In the end, we created a version of Singapore that is entirely speculative, magnified and illusory. It is based on a geomancer’s interpretation of the city rather than an experiential one.

Although it is a rather hackneyed reference in art discourse, Italo Calvino’s Invisible Cities is a fitting reference for our experience of Singapore. We too were regaled by a fantastical version of the city, with fengshui master Tan Khoon Yong acting as the Marco Polo to our Kublai Khan. The artwork on the hoarding of SAM’s heritage building on 8 Queen Street has numbered neighbourhoods and locales corresponding to names given by him in his book The Secrets of the Five Dragons: Feng Shui and Singapore’s Success. Spending endless hours poring over maps, modelling and rendering the city, its geography and architecture began to haunt our dreams and become unreal. It will be a thrill to one day, finally explore the city and transmute our virtual experience and understanding into reality.

Tell us more about the psychedelic-like aesthetic that runs through The Green Crab and several of your other works. Where does it originate from and how does it function for you?

In many ways, it was accidental and the result of our research and attempt to overlay the infrastructural with the mythological layers of Singapore. It inevitably resulted in a vision of the city that is hyperreal. Our interest in psychedelics and the structure of hallucinatory imagery came from experimentation with virtual reality and the use of 3D animation, which has led us to consider the relationship between consciousness and technology. For us, working with digital media and virtual worlds is an attempt to build a visual language which might be able to articulate speculative, dream-like states. 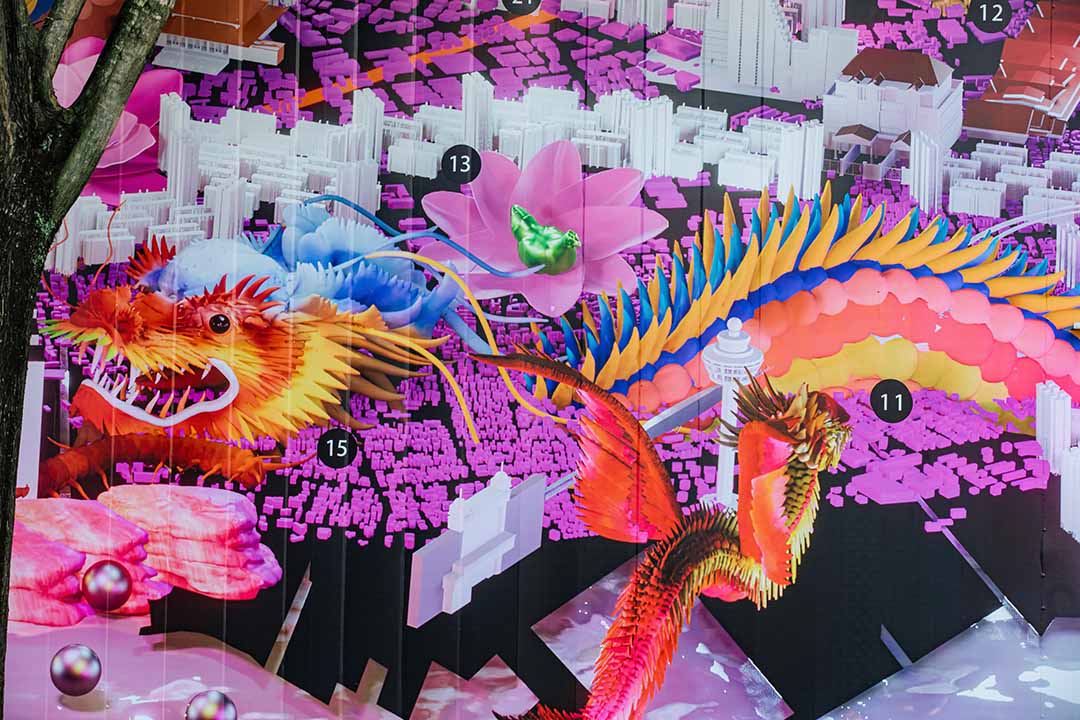 The artwork in front of 8 Queen Street is based on places in Singapore mapped out by a fengshui master as detailed in the numbers.

Several of your works offer an alternative and speculative reading of cities and their spaces. Why are you interested in such an approach and how has it impacted your experience of places?

The Green Crab is in many ways a companion piece to our earlier work, Nostalgia Machines, which was commissioned by Tai Kwun Contemporary in 2019. That work examined Hong Kong and the western techno-orientalist desires, which animate the myth of the city through the aesthetics of cyberpunk and in a more recent context, vaporwave. However, there is no mythology which animates Singapore in the same way. It is why the writer William Gibson and architect Rem Koolhaas have variously described the city as a “Disneyland with the Death Penalty” or a “Potempkin Metropolis” respectively.

Singapore seems to frustrate the orientalist gaze of the west and is thus condemned as “boring”. Our work offers a counterpoint to this narrative by delineating the lines of the spiritual, metaphysical state that belie the western, globalised exterior of Singapore.

Explore in detail the spiritual flows of Singapore. The Green Crab: A Diagram of Auspicious Spatial Organization is on the hoarding around SAM’s building on Bras Basah and 8 Queen Street until 28 August 2022.