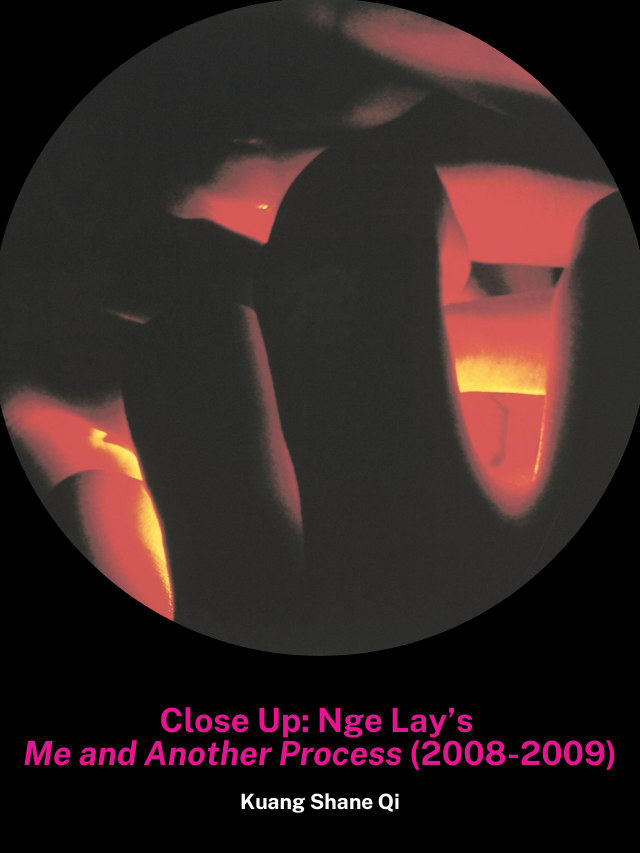 Bathed in a diffuse red-and-orange glow, a pair of hands gently cups a glowing ball of light. The light is a subtle thing, expanding outwards from the palms and through the gaps between the fingers, casting the hands in a translucent glow. Me and Another Process (2008–2009) is an enigmatic and unsettling work.

Comprising five close-up shots of human hands, the photographs convey anything but familiarity. Flesh glows as if lit from within, rendered seemingly luminous. The sense of uneasiness hinges on the disconnect between our experience of the body as tangible and opaque, versus the ghostly appearance of the images. The zoomed-in composition, with hands pictured in extreme close-up, further alienates the viewer by presenting the hands as disconcertingly large. With each photograph printed at 91.4 x 121.9 cm, the hands are larger-than-life and vastly out of proportion, looming out of the darkness and reaching into our world. Even as we may be inclined to project our experiences upon a familiar figure, our desire to do so is frustrated by its strangeness. 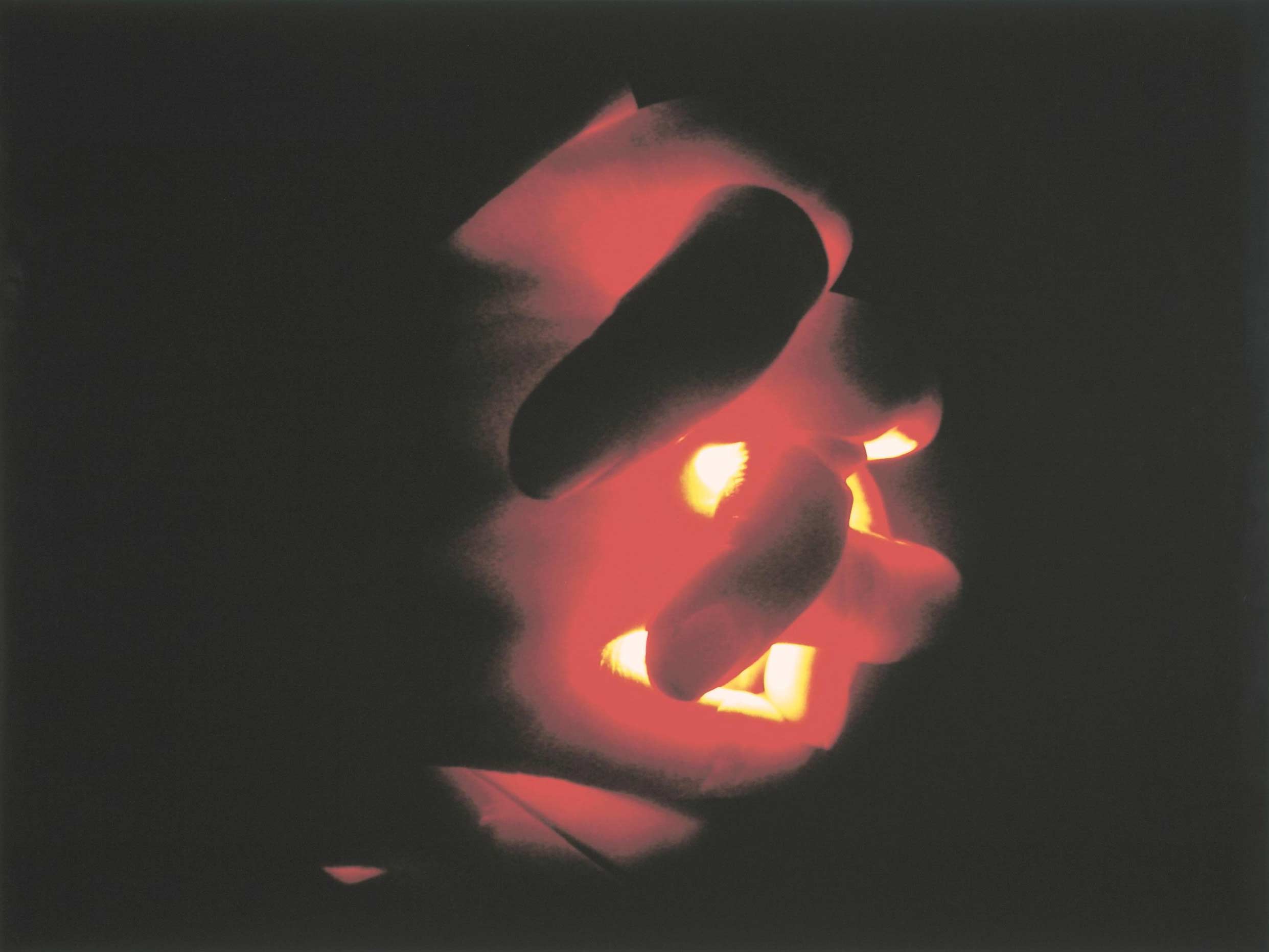 Created by Nge Lay in 2008, in the wake of Cyclone Nargis, Me and Another Process sheds light on everyday resilience through emphasising the mundane experience of crisis. Based in Yangon, Myanmar, at the time, Nge Lay was forced to live through the cyclone and its impact on the city. Cyclone Nargis struck Myanmar in May 2008, tearing through the countryside and leaving destruction in its wake. Affecting more than 50 townships, the cyclone displaced 800,000 lives, and more than 140,000 people were killed.1 The aftermath of the cyclone was a period of crisis and upheaval, with order and stability turned on their heads.

While the subject matter of Me and Another Process remains ambiguous, the photographs are generally taken to be a “reference to [Yangon’s] frequent blackouts,”2 where the light “acts… as a symbol of hope against the struggles of life.”3 This reading of the work as imbued with hope depends on the conventional symbolism of light as metaphorical inspiration and illumination, turning the object of a torchlight into a representation of “empowerment, which the artist holds in the palm of her hands.”4 After all, Nargis was one of the most devastating disasters that Myanmar had faced. Key infrastructure such as roads, hospitals, schools, agricultural resources, and electricity supplies were destroyed. Beyond this vast physical toll, Nargis also revealed the government’s crucial shortcomings in managing the crisis, whether in terms of emergency preparedness or lack of humanitarian aid.5 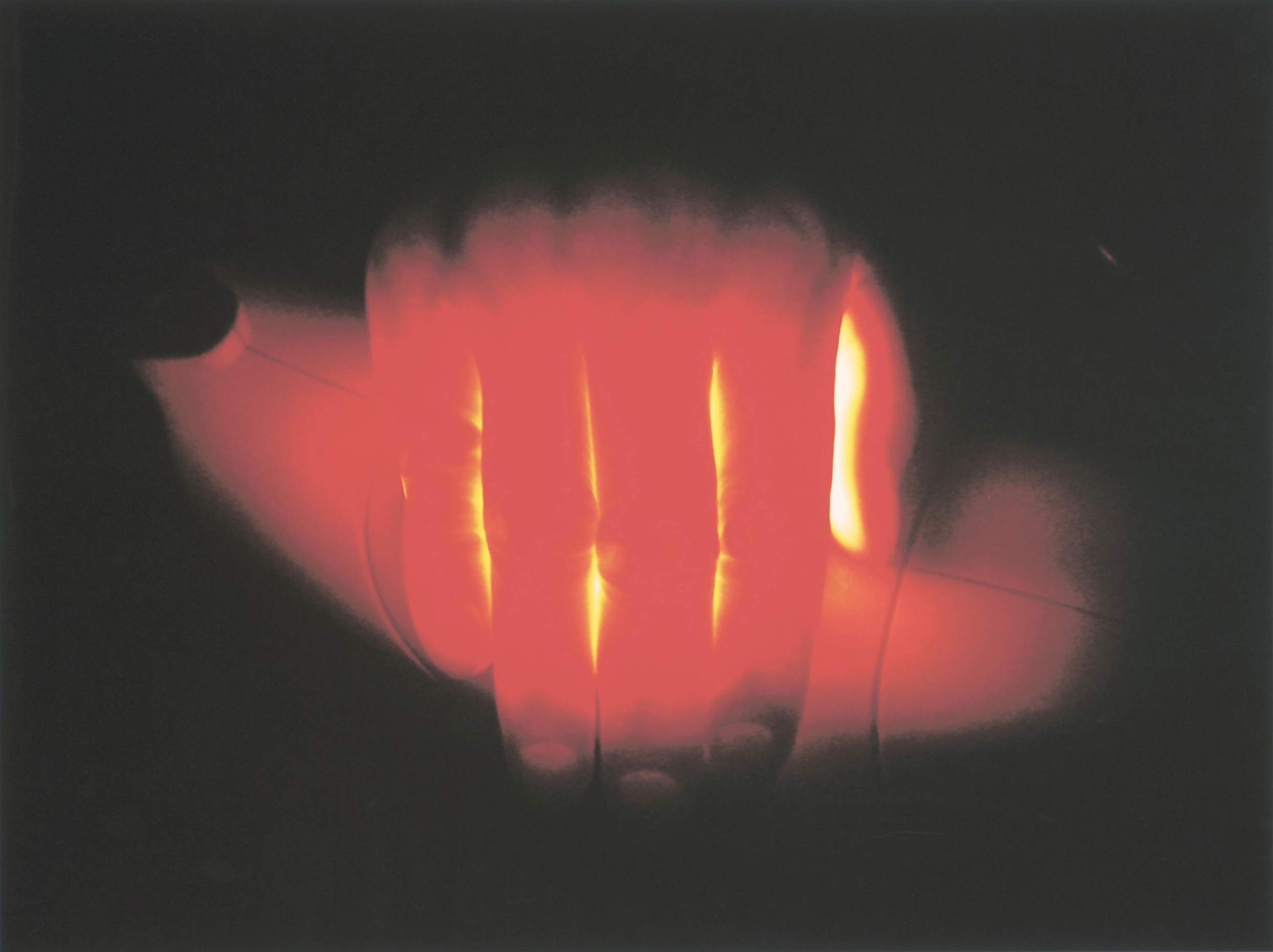 As tempting as it may be to consider the work as a message of hope or social critique, there are several aspects that defy neat characterisation. The experience of light in this work conjures an eerie, ominous sense of hiddenness, dwelling in the unfamiliarity of bodily feeling and raising a new way of seeing. The work raises the possibility of a different kind of sight, as distinct from a human way of perceiving the world. Reminiscent of infrared vision, the glowing red hues of the photographs could also suggest a non-human vision that viewers are fundamentally unable to understand. Significantly, even as the hands are rendered luminous and ghostly, the image nonetheless evokes the sense of touch. This tactility is conveyed through the photographs’ fiery red tones, which suggest heat. Hence, despite the work’s emphasis on disembodiment and defamiliarisation, it is grounded in bodily sensations as coveted through temperature. As these contradictory experiences of ghostliness and tactility are brought to the fore, the viewer is left with a sense of unresolved unease. In this regard, Nge Lay transforms the prosaic and mundane into something unfamiliar, taking everyday actions out of their contexts to become almost other-worldly.

Abstraction is a valuable tool for artists seeking to put forth state-critical or unorthodox views, using figurative representation and plausible deniability about their works’ contents to bypass restrictions. A work as abstract, experimental, and rooted in the photographic medium as Me and Another Process could be influenced by current events but not primarily about them. Historically, strict censorship laws in Myanmar have led to the repression of artistic voices, where “state-regulated cultural education was aligned with nationalist aims, and so all other forms of “deviant” practices were condemned to strict censorship.”6 The work’s abstract nature could serve to mask an embedded critique of the Myanmar government’s lackadaisical management of the cyclone’s aftermath, where oblique references shield the artist from the state’s censors. While criticising the state outright could lead to recrimination, portraying lived experiences in crisis as an artistic experiment would take the focus away from potential anti-government sentiments. 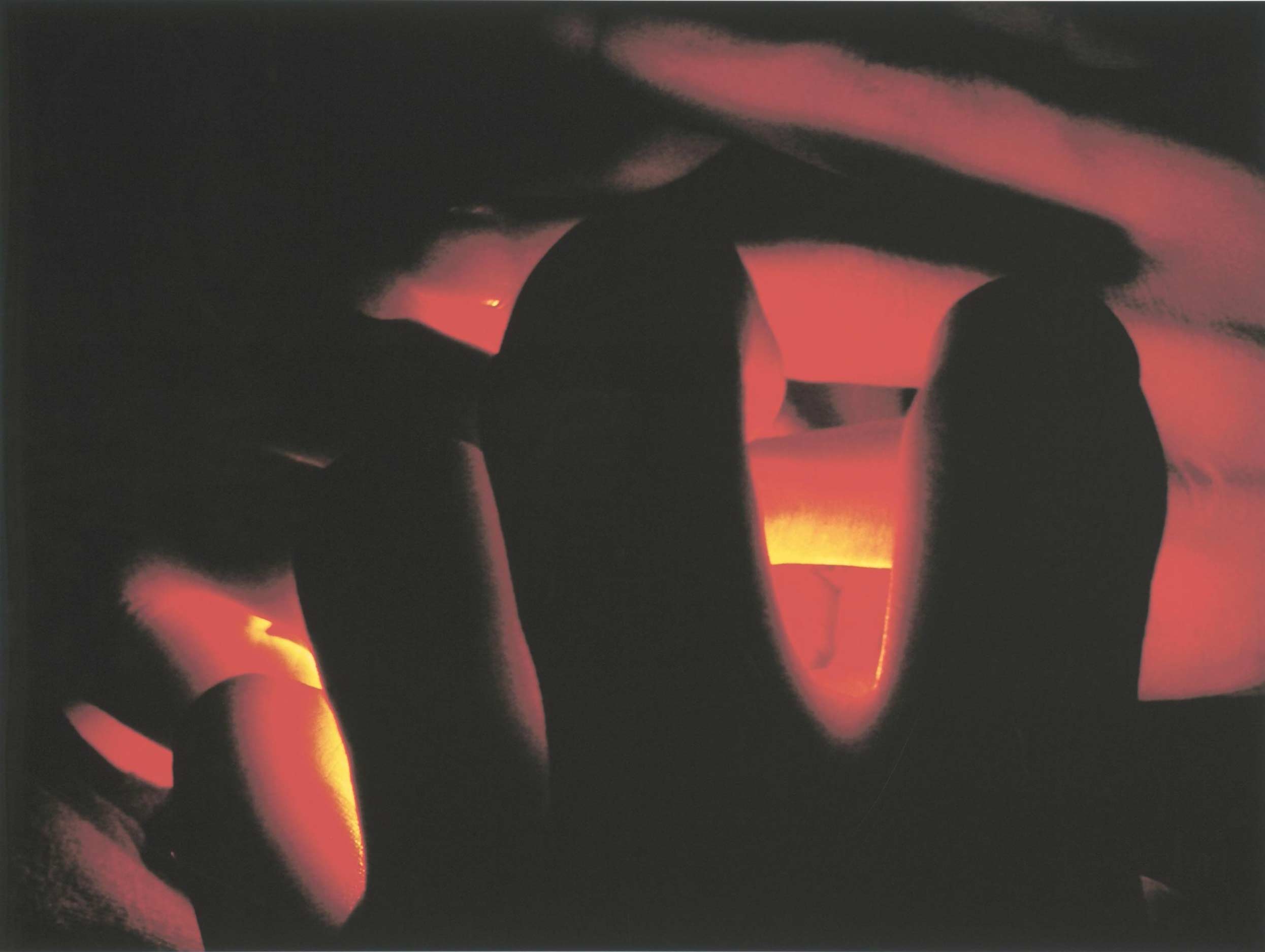 Perhaps the work does not so much represent narratives of hope amidst the darkness, as an engagement with the everyday experience of crisis. As a household staple in Myanmar, the torchlight seems unremarkable in day-to-day life, as the presence of the item tends to be taken for granted. Despite its unremarkability and ubiquity, it is significant in ensuring that people can navigate through the darkness from electrical shortages. This work explores the power of simple mechanical processes in creating striking aesthetic effects, where shining light upon an object engenders eeriness and disembodiment, highlighting the ease with which one can defamiliarise everyday life. In this sense, the mechanical process almost seems to take on its own life, where its unremarkable mundanity creates an image that is viscerally out of the ordinary. In the absence of external help, it is perhaps holding on to such extraordinary moments within the everyday that can tide individuals through crises.

This disjunction between the mundane and the surreal is also reflected in the title. The phrase “Me and Another Process” conveys nonchalance, where the use of the word “another” suggests a routine and possibly repetitive process. This is especially at odds with the implied significance of the photographs, whose large scale and visually striking composition seem to demarcate the pictured hands as something important and attention-grabbing. The reality that the photographs are just “another” artistic experiment suggests that the social context is not immediate to the creation of the work, and it is thus possible that reading the work as a societal critique is not fully appropriate. 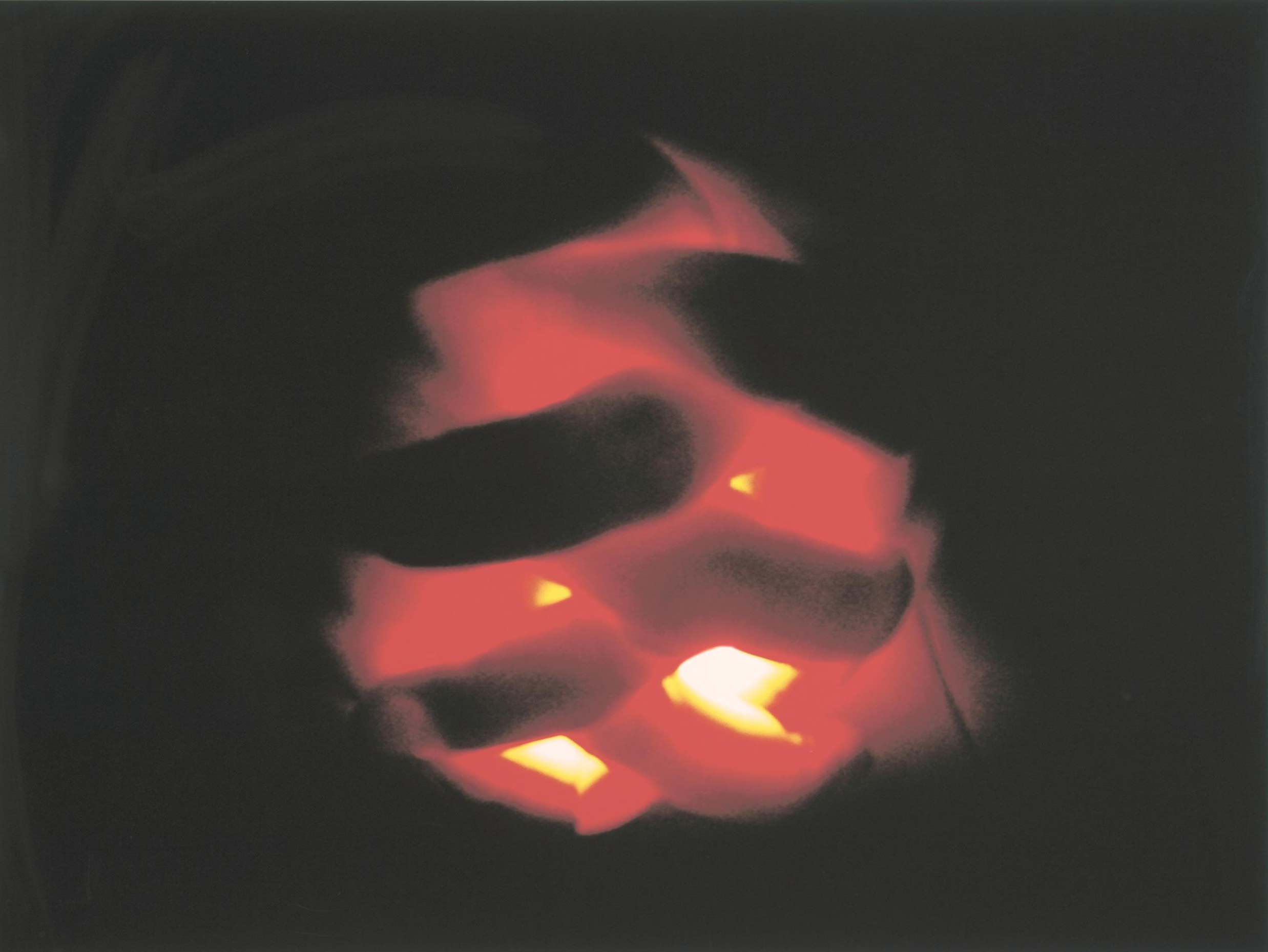 When discussing artworks from Myanmar, there is a tendency to fall back on assumptions made about creating art under dictatorship. These works are often pigeonholed into interpretations regarding art as “resistance against the harshness of everyday life and a lack of resources,”7 where assumptions about the country’s social context risk overshadowing the work itself. While Me and Another Process could certainly be viewed through this lens, doing so would neglect the artist’s experimentation with and statements on the medium and artistic process, which arise independently from the context. Hence, relying on preconceived notions of what Myanmar art entails can potentially be short-sighted — rather, for a more robust and representative discussion of such art, one could use the work as a starting point for analysis instead of considering it from the outside-in.

Shane Qi is an English Literature and Art History student at Nanyang Technological University (NTU). Apart from her research interests in religion, folklore, and urban experiences, she also enjoys making crafts and befriending cats. Shane was an intern at the Singapore Art Museum from May to August 2021.

6 Wu, Simon. “Modify Your Dissent: A Performance on the Streets of Yangon.” In post: notes on art in a global context. Museum of Modern Art, March 10, 2021. https://post.moma.org/modify-your-dissent-a-performance-on-the-streets-of-yangon/.

7 Benini, Ilaria and Luigi Galimberti. “A Country in Transition: The Role of Art and Artists in Contemporary Myanmar.” In Seismopolite: Journal of Art and Politics. December 29, 2015. http://www.seismopolite.com/a-country-in-transition-the-role-of-art-and-artists-in-contemporary-myanmar.