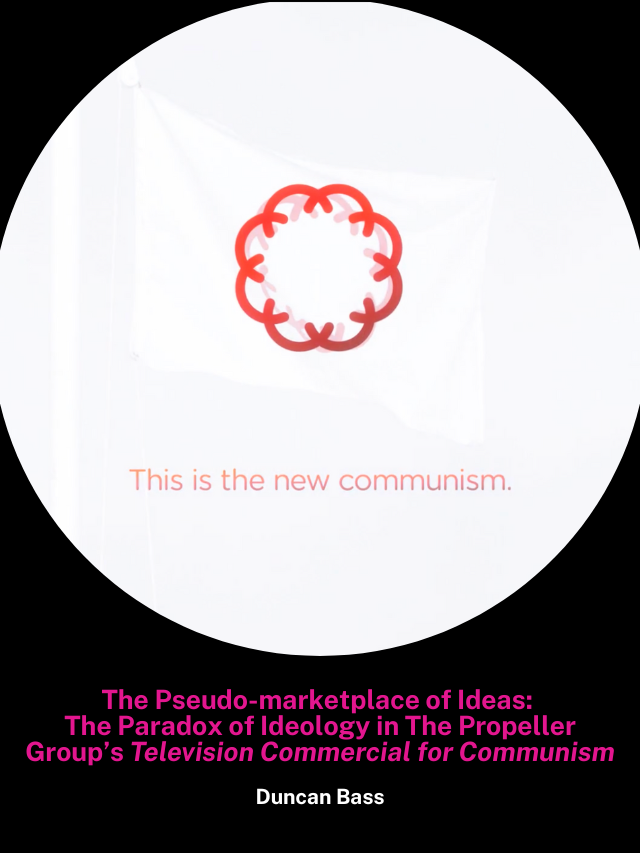 The Pseudo-marketplace of Ideas:
The Paradox of Ideology in The Propeller Group’s Television Commercial for Communism

This essay investigates the sincerity and political possibilities of The Propeller Group’s Television Commercial for Communism (2011–12) (TVCC). This is an unconventional collaboration between The Propeller Group and the advertising agency TBWA\Vietnam, who are tasked by the artists to rebrand the idea of communism; in the words of Naomi Beckwith, “the result is an advertisement whose content is communist propaganda and whose form is capitalist propaganda.” Reading TVCC through the lens of twentieth century media theory and in the context of the twenty-first century political landscape, the essay draws on the ideas of Beckwith, Theodor Adorno and Max Horkheimer, and Mark Fisher, to explore the potential for this ideological ambiguity to return some degree of democratic agency to the modern citizen-consumer.

What distinguishes advertising campaigns from political propaganda? Commercial goods from ideological affiliation? Is it the method of communication, the target audience, the underlying ‘product,’ or the motivations and assumptions of those behind the message? In the same historical moment wherein global capitalism seems to recuperate every political alternative as yet another commodity to be plied to discontented consumers,2 political propaganda becomes the purest form of commercial advertising. Embracing this paradox, The Propeller Group’s Television Commercial for Communism (2011–12) turns the capitalist propaganda machine toward new ends: a renewed image of communism.

The Propeller Group — comprising artists Phunam, Tuan Andrew Nguyen and Matt Lucero  — was founded out of necessity in Ho Chi Minh City in 2006. In order to obtain permission from the Vietnamese government to film in public spaces for their ongoing documentary projects, Nguyen and Phunam registered The Propeller Group as a film and advertising agency.3 In addition to its own projects, The Propeller Group has used its status as a media company, to collaborate with other artists. The group’s ambiguous status as both an art collective and a commercial media organisation is reflected in its multifaceted artistic projects, which highlight the global circulation of cultural products and their ideological underpinnings.

Television Commercial for Communism (TVCC) was realised through an unconventional artistic collaboration between The Propeller Group and the advertising agency TBWA\Vietnam. The group approached TBWA with a seemingly simple brief: to re-brand communism for the twenty-first century. The project is expressed through multiple forms, including a multi-channel video installation documenting TBWA’s brainstorming sessions, an animatic that captures the creative team’s vision, and the resulting sixty-second advertisement, which attempts to convey communism’s (new) brand identity. The artwork is an exercise in ideological conflict that results, in Naomi Beckwith’s words — “an advertisement whose content is communist propaganda and whose form is capitalist propaganda.”4

Although the stated goal of the project may be a new brand identity and marketing campaign for communism, the most interesting ideological tensions express themselves in TBWA’s brainstorming and pitch sessions. In these scenarios, the advertising industry, a product of capitalism that flourished during the Cold War era, is tasked with understanding communism and packaging it for consumers. This paradox is not lost on the advertising team, as one member highlights during the initial think-tank session: “The irony is that this is a very capitalist way of looking at an idea like communism.” Experienced as a five-channel synchronised projection with screens arranged in a pentagonal configuration, TVCC places the viewer at the centre of these round-table conversations in the TBWA offices. By giving the audience a place at the table in these closed-door meetings, The Propeller Group encourages the viewer to identify with the TBWA team, allowing space to appreciate the irony of the task at hand but also prompting earnest consideration of the questions facing the creative team: What is communism? What baggage does it carry? Is it possible to separate the political philosophy from the history of state Communism? And who is the audience for a renewed communist message?

The five-part video installation reflects the progression of creative team sessions that chart the project’s progress from assignment to realisation. The first two sessions provide the clearest insights into the working process of advertising agencies and the incompatibility of their methods — focused as they are on consumer behaviour, business objectives, and the conventions of political advertising — with the stated goal of the brief. Tellingly, TBWA’s target market does not appear to be the proletariat workers and peasants championed by historical revolutionary movements, but a petit bourgeoise consumer class with whom they are most familiar. During the first session, after none of the team members are able to clearly articulate communism’s fundamental tenets, the executive creative director googles the term and shares its Wikipedia definition with his colleagues, briefly expressing surprise at its promise of an egalitarian society: “It’s actually really sweet if you think about it.” In the second think-tank session, these misconceptions deepen, with the team identifying that they need to “separate the idea from the politics.” These brief segments underscore the conflicts embedded in the work, as well as the larger challenges facing the communist project in the twenty-first century — particularly the inability to distinguish communism as a political and economic philosophy from its image in the popular imaginary.

In an attempt to visually convey a break from communism’s political history, the rebranding exercise introduces a new logo meant to distance the idea of communism from the iconographies of state Communism, specifically the hammer and sickle and the red-and-gold colour scheme associated with the USSR, the People’s Republic of China and the Socialist Republic of Vietnam. Appropriating the minimal visual language of Silicon Valley startups, the first draft of the new logo features a series of five ‘C’ shaped arcs — rendered in red, orange, yellow, green and violet — set against a white background. These arcs open outward, forming a five-point star. The final evolution of the logo retains these underlying elements but replaces the five multi-coloured arcs with eight interlocking arcs that instead face inwards, creating a cloud-shaped circle that fades in a uniform gradient from orange at its top to violet at its bottom. Despite attempts by the creative team to dissociate the idea of communism from politics, the application of the new logo to white flags depicted in the final ad and displayed in past exhibitions prevents the project from fully transcending the realm of nationalism or political affiliation.

In the final session the creative team conveys their idea for a commercial to a storyboard artist whose black-and-white ink wash sketches are transformed into an animatic that’s set to an uplifting piano melody. The image sequence closely aligns with the narrative devised by the creative director overseeing the project, following a young girl through various encounters in her utopian society as she collects the five multi-coloured arcs — referred to as ‘smiles’ — that constitute the draft brand identity. While the animatic is ultimately unconvincing, it introduces several elements that are retained in the final ad spot, including the voiceover script with multiple narrators and the campaign’s tagline: “This is the new Communism. Everyone’s welcome.”

The final result of TBWA’s commercial campaign adapts the idealist vision of the animatic but abandons the linear narrative and single protagonist in favour of a more atmospheric approach. Featuring a diverse cast of actors, who hold poses as if frozen in time, the camera pans through the vignettes depicted in the narrative animatic: the cast is dressed in white garments, handling white props and are set against a contextless white background. Notably, the final commercial adapts the campaign slogan, with a slight alteration, rendering ‘communism’ in the lowercase: “This is the new communism. Everyone’s welcome.” This decision follows the distinction made by political historians and reflects the aims of the campaign to distance itself from Communist parties and socialist states, past and present, in favour of the idea of communism as a classless, egalitarian society.

The Propeller Group was established one year before Vietnam joined the World Trade Organization (WTO), an event that expresses the ideological contradictions on display in TVCC. One of the last communist countries to open itself to global capitalism, Vietnam’s 2007 entry to the WTO marked the culmination of Doi Moi policy, a transition from a command economy to a ‘socialist-oriented market economy’ initiated by the Communist Party of Vietnam in 1986. The Doi Moi period coincided with an era of globalisation and Western neoliberal policy that began to erode after the 2008 global financial crisis. At the same time that the global financial system began to shed its veneer of legitimacy, foreign brands were flooding into the Vietnamese market and product advertisements began to appear alongside state-sponsored propaganda. As Karsten Lund writes, TVCC “responds to the specific realities of life in the Vietnam of today — a quickly changing nation with a communist past. In doing so, [TVCC] underlines how advertising and propaganda are close cousins: successful ideologies or political movements are driven by the marshalling of human desires.”5

Returning to Beckwith’s distinction between content and form reveals the limits of political agency in the twenty-first century. Placing TVCC into post-war art historical discourse, Beckwith describes the break of Pop Art from the prevailing mode of American minimalism, arguing that “The Propeller Group lays bare the presumptions that the historical inclusion of ‘life’ into art was, more accurately, the inclusion of ‘commodities’ in art.” She goes on to ask, “How can we put pressure on that narrative’s dependence on Western market forces deemed parallel to democratic exercises?”6 Later in her essay, Beckwith invokes Mark Fisher’s analysis of the commodification of political alternatives under capitalism:

“TVCC captures the way corporate instincts co-opt the most strident anti-market ideologies while suggesting that the only true global language may be consumerism. In a more sinister way, TVCC realizes the contemporary condition that Benjamin H.D. Buchloh, citing Theodor Adorno, called ‘the proto-totalitarian rule of consumer and leisure culture.’ Advertising, which manufactures commodity desire, and transforms citizens into consumers, is just as powerful as any form of political ideology.”7

This transformation of citizens into consumers is reflected in the TBWA team’s conflation of democracy and capitalism in their second brainstorming session. This reduction of democratic agency to market forces is the outcome of decades of neoliberal policy that has not only privatised the traditional functions of government but, more significantly, has displaced the responsibility for its actions onto the individual. The only leverage the citizen-consumer has in global debates such as climate change, is the ‘ethical’ consumerism epitomised by the deluge of greenwashed products peddled by the same monopsony of multinational corporations.

This is only the most recent manifestation of a trend that has persisted throughout the modern era. As Adorno and Max Horkheimer argue in “The Culture Industry: Enlightenment as Mass Deception” (1947), the culture industry and advertising are no longer distinguishable in an era of monopolised pseudomarkets. For them, advertising is a “negative principle, a blocking device: anything which does not bear its seal of approval is economically suspect.”8 Herein lies the true potential of TVCC, in an era where democracy functions as a pseudomarket of ideas — offering the illusion of agency without any meaningful input — the recognisable form of the television advertisement legitimises communism as a viable political and economic system. Following Adorno’s and Horkheimer’s conclusion that the “triumph of advertising in the culture industry” is that consumers buy the cultural products they consume, “even though they recognize them as false,” perhaps the approach of TVCC offers a way forward. Rather than a revolutionary break, TVCC’s transparent packaging of communism as an ideological product may encourage citizen-consumers to embrace its message, despite themselves.

Author Bio Duncan Bass is Curator at the Singapore Art Museum. His writing and curatorial projects explore the intersections of art and contemporary culture with an emphasis on the societal implications of emerging technologies and the politics of visuality.

Artist Bio The Propeller Group consists of Phunam, Tuan Andrew Nguyen and Matt Lucero, was formed in 2006 and is based in Ho Chi Minh City. A platform for collective thinking and coordinated action, the group creates large-scale productions that combine fine art and media practices, often collaborating with international artists and cultural producers.