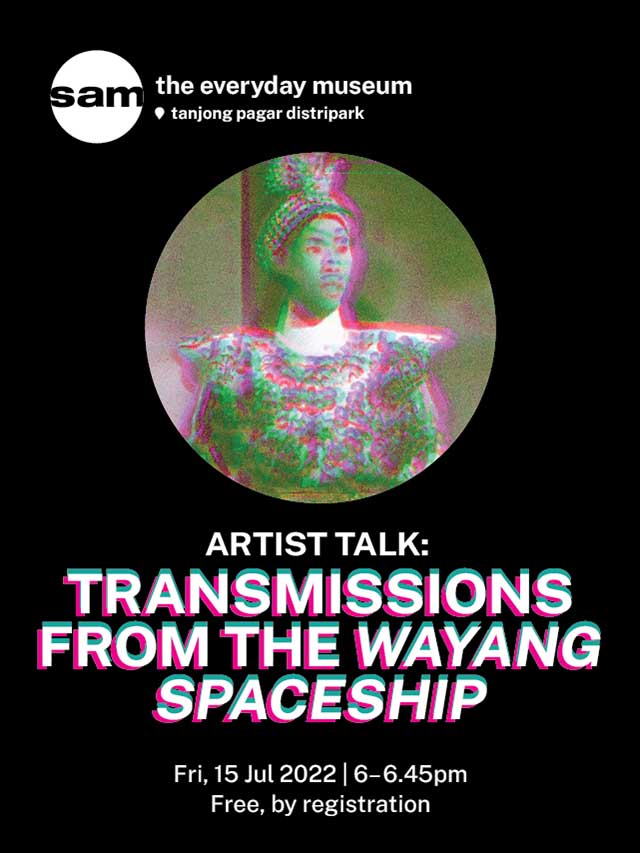 On 15 July 2022, The Everyday Museum, a public art initiative of the Singapore Art Museum, will launch Ming Wong’s latest project Wayang Spaceship, a large scale futuristic-theatrical installation that traces the modernisation of Cantonese opera, including its cinematic transformations and unlikely relationship with the development of science fiction in the Chinese speaking world. Join Ming Wong as he discusses the decade-long research process that led to the Wayang Spaceship and the interrelated (art) tools that enable his quest to discover how information technology drives historical conceptions and future of Asia.

The artist talk will be facilitated by SAM curators Shabbir Hussain Mustafa and Syaheedah Iskandar. It will be followed by the inaugural public activation of the Wayang Spaceship at 7pm.

This programme is presented on the occasion of the launch of Wayang Spaceship, commissioned by The Everyday Museum with the support of Sun Venture.

About the artist
The world of cinema is Ming Wong’s gateway to imagination. In many of his works, he subverts the role of the actor in order to reveal how gender, race, nationality, language, body-types and other categories are always a form of performance. Sometimes Wong plays all the roles himself—even learning different languages to do so. Wong has maintained a particular interest in Cantonese opera, having grown up with it in Singapore. Since 2012, he has investigated the modernisation of Cantonese opera in the 20th century, its cinematic transformations and unlikely relationship with the development of science fiction in the Chinese speaking world. Alongside the Wayang Spaceship, other works that address this theme include Windows on The World (I-IV) (2014–), Blast off into the Sinosphere (2014–), and Scenography for a Chinese Science Fiction Opera (2015). The latter was a work that invited the public to walk through a full scale hand painted stage set of a hypothetical science-fiction themed Chinese opera inspired by cosmological motifs from from Buddhist cave paintings and Eastern Bloc science fiction movies. Wong represented Singapore at the 53rd Venice Biennale in 2009 with Life of Imitation, which won a special mention. The Wayang Spaceship at the Singapore Art Museum will evolve over a two-year period, and will feature a range of performances and access programmes. www.mingwong.org