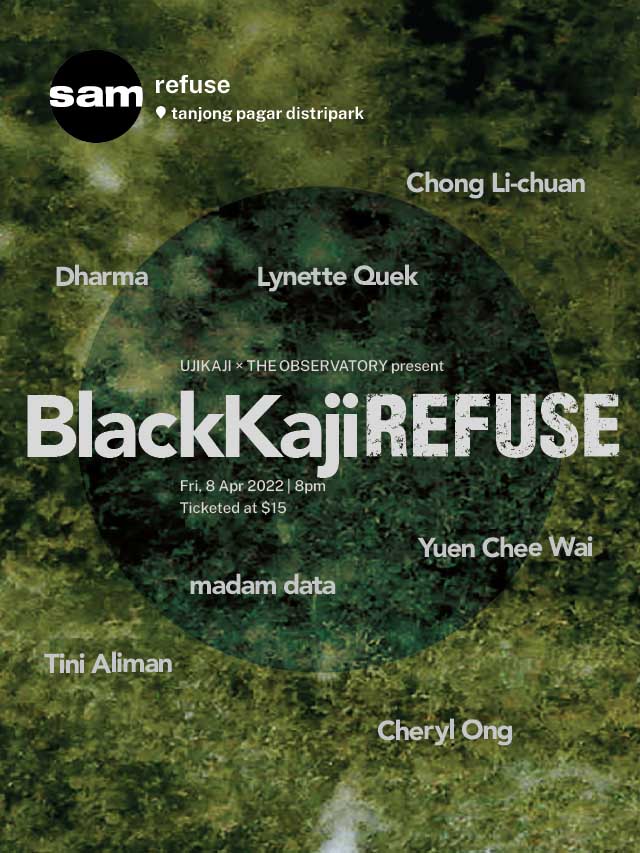 BlackKaji—a study of the unseen, unsound, unsuspecting and unstable—is a regular series of live gigs and presentations conceived by Ujikaji and The Observatory. In the spirit of mycorrhizae, or symbiotic associations between fungi and plants’ root systems, members of The Observatory—Dharma, Cheryl Ong and Yuen Chee Wai—joined by fellow musicians Chong Li-Chuan, madam data, Tini Aliman and Lynette Quek, mingle and merge, perform and unform, fuse and refuse in this BlackKaji live performance, held in conjunction with the REFUSE exhibition.

The Observatory
The Observatory is a band whose music and cultural ethos is to respond and speak back to the contemporary afflictions in Singapore and the global milieu. Its current constellation comprises multi-instrumentalists Cheryl Ong, Dharma and Yuen Chee Wai who tread on improvisation, inter-media experimentation and noise-adjacent territories.

By attending this programme, you consent to being photographed, filmed and/or video-recorded. Your name, image, and/or voice on Zoom or other virtual platforms where the programme is conducted on may also be captured. These materials may be used by SAM for museum-related publicity purposes only.

We reserve the right to cancel or rearrange the organised event.