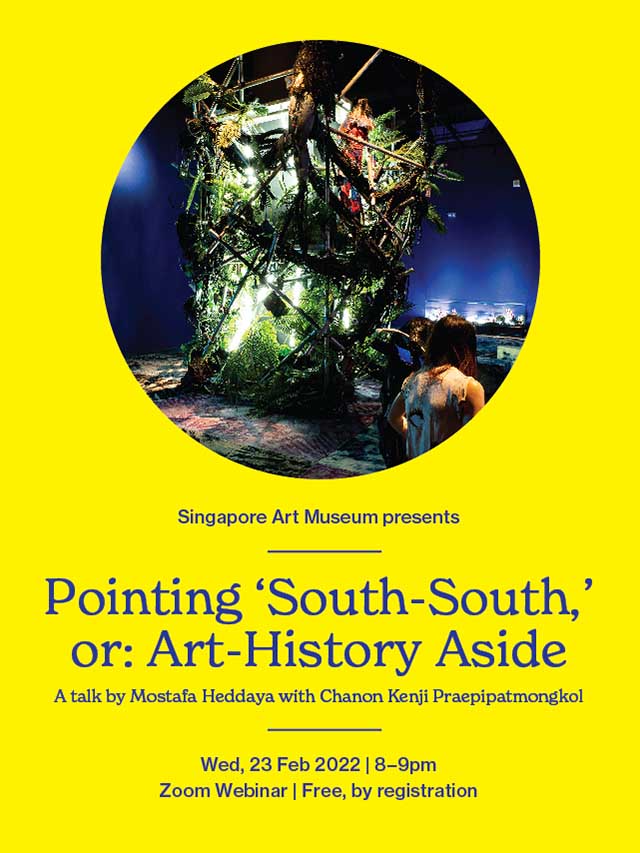 Pointing ‘South-South,’
or: Art-History Aside

In the exhibition A Machine Boosting Energy into the Universe, Korakrit Arunanondchai takes the naga, a serpent-deity of Southeast and South Asian lore, as a figure of unruliness representing a power from “below.” In doing so, he injects chance, chaos and revolutionary forces into the narrative of art and history. Mostafa Heddaya will consider how this gesture of invoking the powers of the South to subvert dominant histories has become fundamental to the rhetoric of contemporary art today. This talk departs in part from an essay appearing in the January 2022 issue of Artforum (“Left, Right, Inside, Out: Art and Comparison”).

Lecture Abstract:
The “South-South” model for comparative assembly makes a historical metaphor of solidarity out of the method of comparison. Its wish now is to disintermediate the North, to void, repress or “provincialize” it from below (and/or above). “South-South” seems motivated as method by a memory of Third-Worldism. So brought up to date from the Cold War, ‘South–South’ might appear a non-aligned nostalgia by which failed geohistorical struggles against empire can be reconstituted as a single, borderless corpus of comparable parts. ‘Eurocentrism’ assumes Europe, South-South points North, and this abstract geographism of critique now finds itself at home as house style in North Atlantic culture. What does recent North Atlantic culture have to say about placing beside, anyway? “Beside permits a spacious agnosticism about several of the linear logics that enforce dualistic thinking,” Eve Sedgwick has influentially written, willing a ‘besideness’ which is point-less, an abbey for abeyance. Endowed with power enough to redeem any old North with mystical minority, ‘South-South’ begs art’s history for an account of itself.

Mostafa Heddaya
Mostafa Heddaya is a joint doctoral candidate of the Department of Art & Archaeology and the Humanities Council at Princeton University. His writing has appeared in Art in America, Artforum, ArtAsiaPacific, ArtNews, The Art Newspaper, The American Prospect, Cura, e-flux journal, Nka, and Yishu, among other periodicals (and occasional exhibition catalogues) in print and online. Past projects include Art Books, Book Art, Art, a series of conversations on editorial procedures in recent art practice/history/criticism (2021); and Fake Friends, a symposium on comparison and similitude held at Princeton and the Institute of Contemporary Art, Philadelphia (2018). He previously worked as a writer and editor on art in New York.

Chanon Kenji Praepipatmongkol
Chanon Kenji Praepipatmongkol is an art historian and Curator at Singapore Art Museum. He holds a PhD from University of Michigan and previously worked for Tate Britain and Museum of Contemporary Art Chicago. His current research explores the fault lines between contemporary art, craft and the digital. His writing has appeared in Artforum, Aperture, British Art Studies, and Oxford Art Journal.