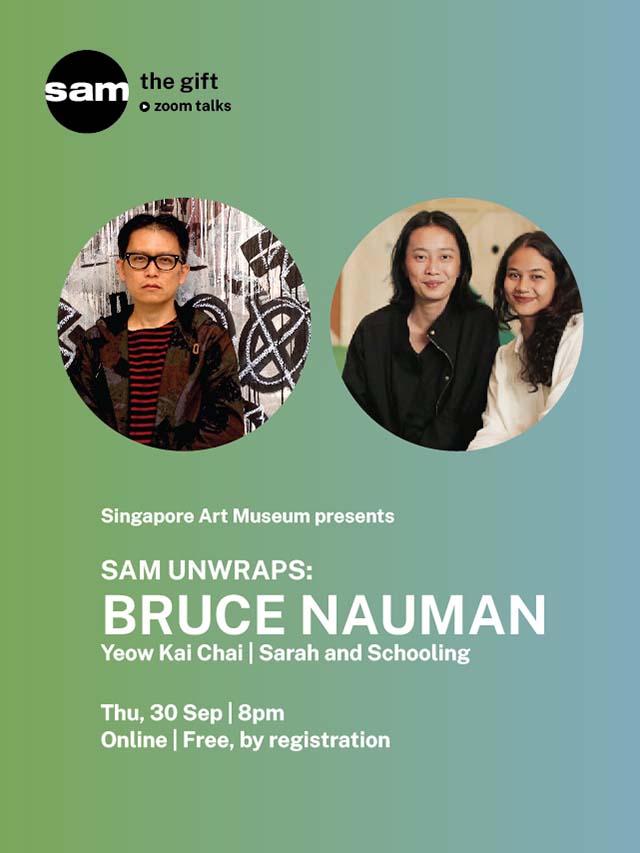 A gift is almost always bound up with anticipation. Unwrapping a gift—be it a physical or conceptual one—reveals feelings of reverence mixed with wonder, or even fear. SAM UNWRAPS invites two or more explorers of culture to team up to unpack, unveil, and unmask an artwork through their personal interpretations, whether verbal, visual and/or performative.

I: BRUCE NAUMAN | Yeow Kai Chai, and Sarah and Schooling

Experimenting with sound, film, video, photography, neon, language, performance and other media, American artist Bruce Nauman continually tests what an artwork can be. In this edition of SAM UNWRAPS, poet and editor Yeow Kai Chai, and graphic designers Sarah and Schooling take on his 1974 performance piece Body Pressure by teasing out the relationship between textual and visual narratives. Riffing on notions of deconstruction and reconstruction, Yeow wrote Under Pressure, an anagrammatic response to Nauman’s original script, using all 752 letters contained within it. In turn, Sarah and Schooling art-directs video outcomes of both Nauman’s and Kai Chai's texts using kinetic typography.

Yeow Kai Chai is a poet, fiction writer, and editor. He has three poetry collections, One to the Dark Tower Comes (2020), Pretend I’m Not Here (2006), and Secret Manta (2001). A co-editor of Quarterly Literary Review Singapore, he was Festival Director of Singapore Writers Festival from 2015 to 2018.

Sarah and Schooling is the eponymous design practice of Sarah Tang and Alison Schooling, a two-woman graphic design studio based in Singapore. An ardent supporter of Singapore’s literary scene, the studio is actively involved in designing books and publications across multiple genres. Sarah and Alison are also adjunct lecturers at both LASALLE College of the Arts and Nanyang Academy of Fine Arts.