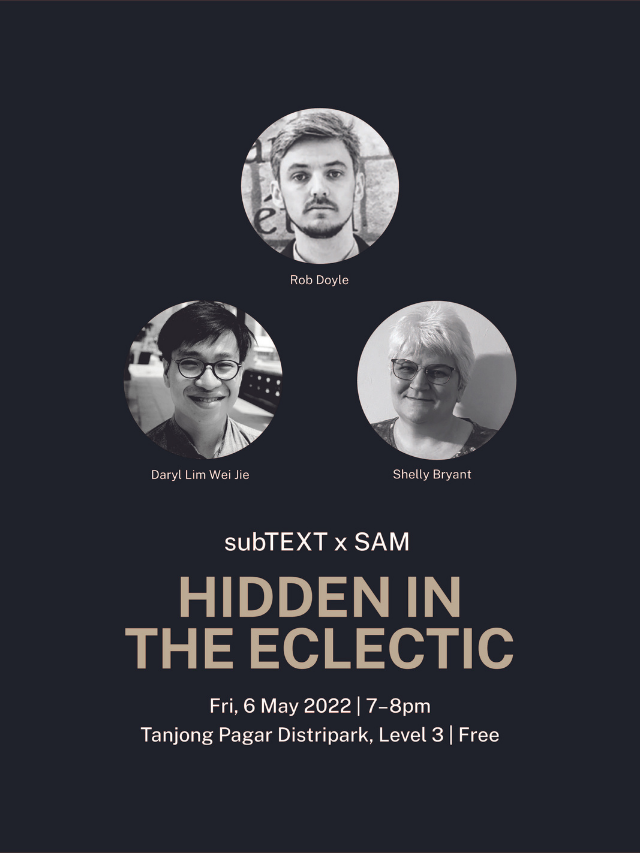 Contemporary art boasts a lively diversity of ideas and experimentation. Good literature similarly is open to exploration and interpretation, with insights tucked between the lines. In the atmospheric ambience of night-time Tanjong Pagar Distripark, featured writers will share their creative works/words and what’s hiding in the attics of their minds.

Seats are limited on a first-come-first serve basis.

About subTEXT
This iteration of subTEXT is co-organised by Yong Shu Hoong and SAM. subTEXT is a long-running literary reading series that took place at different venues since 2001.

About the speakers
Rob Doyle (Ireland)
Rob Doyle’s debut novel, Here Are the Young Men (2014), has been made into a film starring Dean Charles Chapman and Anya Taylor Joy. He has written for the New York Times, Vice, Sunday Times, Dublin Review, Observer and many other publications. His other books include Threshold (2020), shortlisted for the Kerry Group Irish Novel of the Year, and Autobibliography (2021).
Rob is a Visiting Writer at the Asia Creative Writing Programme, a collaboration between the National Arts Council and the School of Humanities at Nanyang Technological University.

Daryl Lim Wei Jie (Singapore)
Daryl Lim Wei Jie is a poet, editor, translator and literary critic. His first book of poetry is A Book of Changes (2016). He is the co-editor of Food Republic: A Singapore Literary Banquet (2020), the first definitive anthology of literary food writing from Singapore. His latest poetry collection is Anything but Human (2021). His poems won him the Golden Point Award in English Poetry in 2015.

Shelly Bryant (Singapore)
Shelly Bryant divides her year between Shanghai and Singapore. She is the author of 12 volumes of poetry, a pair of travel guides for the cities of Suzhou and Shanghai, a book on classical Chinese gardens, and a short story collection. She has translated more than 100 books from Chinese to English, and edited two poetry anthologies

Moderator:
Yong Shu Hoong has authored six poetry collections, including Frottage (2005) and The Viewing Party (2013), which both won the Singapore Literature Prize, and Right of the Soil (2018). He is one of the four co-authors of The Adopted: Stories from Angkor (2015) and Lost Bodies: Poems Between Portugal and Home (2016).