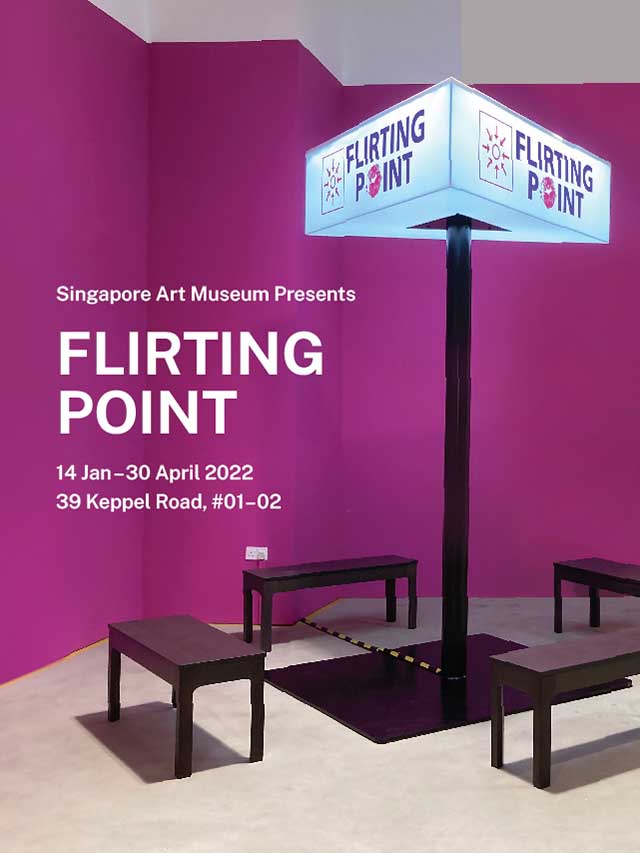 An interactive installation, Flirting Point consists of a lit signpost and four benches. ‘Flirting Place’ is a satire on the perceived behaviour of Singaporeans, commenting on how something as impromptu as flirting will happen only at a designated spot, under instruction. First commissioned by Zouk for Zoukout 2009, in collaboration with SAM, the work was subsequently collected by SAM and installed on the front lawn of the museum’s building along Bras Basah Road in 2010.

With the opening of SAM at Tanjong Pagar Distripark, a 2022 version of Flirting Point is presented at the entrance foyer of this new premise, inviting visitors to ponder over how social interactions reflect the underlying conditions that govern our behaviours. Installed more than a decade after it was first shown, the satirical underpinning of the work takes on renewed meaning in the current time when interactions are guided by Safe Management Measures and influence how social connections can be mooted or circumvented with some humour and creativity.

vertical submarine (VS) is an art collective from Singapore. Their cross-disciplinary projects, which incorporate theatre and curating, explore methods of storytelling and narrative via words and images. The group has received accolades such as The President's Young Talents Award (Singapore, 2009), The Celeste Prize (New York, 2011), and Finalist for Sovereign Asian Art Prize (Hong Kong, 2015). VS was Associate Director of TheatreWorks (Singapore, 2010–13), and part of the Associate Artist Research Programme at The Substation (Singapore, 2011–13). Apart from the routine international art fairs and commercial shows, they have participated in projects such as Kuandu Biennale (2010), Roundtable: Gwangju Biennale (2012) and The Roving Eye: Contemporary Art from Southeast Asia, ARTER (Istanbul, 2014) and CCC: Jogjakarta organised by Bangkok Arts and Cultural Centre (2016). To date, their widely acclaimed art installations, which includes The Garden of Forking Paths / Mirror Room (2010) and John Martin: Butcher or Surgeon (2015) have travelled to Barcelona, Beijing, Hong Kong, London, Mexico City and Taipei.