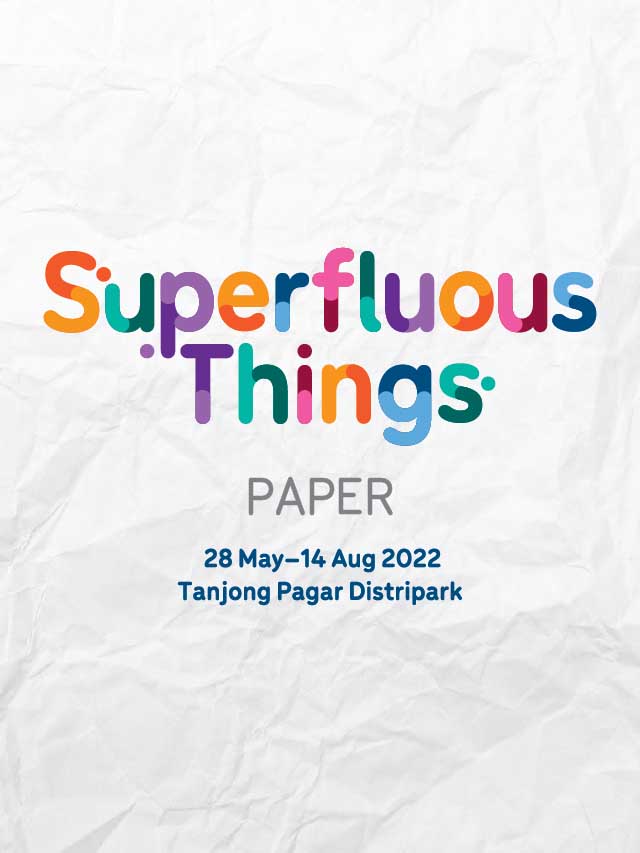 Paper is a carrier of ideas. It is encoded with material intelligence. How do artists think through paper? In an increasingly digital world, is paper still relevant? In the hands of artists, paper affords glimpses of the repositories of knowledge, accumulated over time, constantly being adapted and refined. Paper is employed rather loosely here as a word, an idea, and a process. It is a platform on which artists can showcase their experiences, imprint themselves and inscribe it with both past and present. This exhibition highlights the work of contemporary artists as storytellers, evoking precious personal and cultural memories, through a long tradition of paper manipulation. The works astound through the transformations of pieces of paper into objects of visual feast and irresistible emotional resonance. The journey starts here and continues in The Engine Room. We invite you to activate your five senses and engage intensely with paper, materiality and more, making the familiar, unfamiliar.

Superfluous Things: Paper is an exhibition with interactive components for the young at heart. This exhibition highlights the work of contemporary artists as storytellers, evoking precious personal and cultural memories, through a long tradition of paper manipulation. The works astound through the transformations of pieces of paper into objects of visual feast and irresistible emotional resonance.

Cheryl Teo is a Malaysian-born Singaporean artist who specialises in creating intricate paper sculptures and tactile illustrations. Her practice focuses on craft-based media that embraces the memory of play. She is drawn to the ubiquity of paper and the meticulous process involved in handcrafted design. Teo is also interested in constructing whimsical worlds and toying with our perception of reality through the elements of surprise and scale. She has worked on commercial set design, photo illustrations and installations. She has been featured in local and international publications such as The Straits Times Singapore, Frankie Magazine Australia, and Flow Magazine France.

Jumaadi works with a range of mediums, including drawing, painting, performance, and installation. His practice is informed by personal experience and the political and aesthetic lineages of his homeland, including wayang kulit, shadow-puppet plays originating in Java and Bali. With poetic sensibility, Jumaadi weaves together human and organic motifs to explore universal themes like love, conflict and belonging. His works are in the collections of institutions such as the Art Gallery of New South Wales, Museum of Contemporary Art and National Gallery Australia, and have been featured in the 14th Jakarta Biennale, 5th Moscow Biennale, 13th Gwangju Biennale and 10th Asia Pacific Triennial of Contemporary Art. Born in Sidoarjo, East Java, Indonesia, Jumaadi currently lives and works in Sydney, New South Wales and Imogiri, Yogyakarta, Indonesia.

Nabilah Said is a Singapore-based playwright, editor and artist who works with text as material across different forms. She has worked with Teater Ekamatra, The Necessary Stage, T>:Works, and multiple independent theatre collectives. Her play ANGKAT (2019) won Best Original Script at the Life Theatre Awards. Her play Inside Voices (2019) won the Outstanding New Work award at VAULT Festival, London, and was published by Nick Hern Books (UK). She is currently under commission of Malthouse Theatre in Melbourne. Her years of working as a Straits Times arts correspondent, the editor of regional arts publication, ArtsEquator, and various capacities within the visual, literary and performing arts scenes have allowed her to develop her voice as a cultural commentator in Singapore. Nabilah also teaches writing and critical thinking across various age groups. She has an MA in Writing for Performance from Goldsmiths, University of London.

Keiichi Tanaami graduated from the Graphic Design programme in Musashino Art University in 1960. He quickly forged a successful career in design and advertising, illustrating the Japanese releases of record covers for Jefferson Airplane and The Monkees, among other projects. An encounter with the Japanese neo-dada scene centred around the studio of the artist Ushio Shinohara, as well as Manga-style cartoons, inspired Tanaami’s foray into art. His colourful, overpopulated psychedelic collages, animations and drawings frequently juxtapose war imagery with American and Japanese pop culture, communicating an underlying peace message. Still active today, Tanaami continues to explore new frontiers of creativity.

'Just a Little at a Time'

'Just a Little at a Time'

Just a Little at a Time is a self-initiated project by Cheryl Teo to take on the routine task of making a paper sculpture the size of a matchbox each day. The project, started off as the 100 Days Project in 2017, is based on a prescribed set of self-imposed rules and each miniature would take about five to six hours to complete. According to Cheryl, working in such small scale enables her to see things with fresh eyes, and with each new creation, she is discovering a better understanding of the nature of paper. This relentless pursuit of excellence pushes the boundaries of her craft as she challenges herself to experiment with more complex processes and narratives. The journey has led Cheryl to sharpen her skills, including developing personal techniques in paper construction as well as finding her own artistic voice.

Jumaadi’s art is imbued with a poetic sensibility. Joli Jolan, a word coined and derived from the Javanese term ijol ijolan, references ideas of making an exchange— to swap, to trade and/or to replace. In Joli Jolan, he affords us a glimpse of his grand private cosmology. At first glance it is whimsical but upon a closer look, it reveals a world of peculiarity. A seemingly autobiographical figure carries enormous objects ranging from a pineapple, fishbone, and human foot to miniature mountains and buildings sprouting foliage. Other recurring motifs include the buffalo, tree of life, rootless tree, and tree-less roots. Informed by a traditional Javanese worldview and that of a postmodern nomad living in a global world straddling his studios in Imogiri (Yogyakarta, Indonesia) and Sydney, Jumaadi weaves together a personal iconography of human and organic motifs, where natural and spiritual worlds converge.

Li Hongbo's paper sculptures brings a breath of fresh air to traditional Chinese arts and crafts. Hongbo transforms the medium of paper, one of the key inventions in Chinese civilisation, through deconstruction and reassembling. In doing so, he creates a shift away from the familiar and the overlooked, drawing attention to the hidden essence of an object's existence, offering the viewer a platform to reconsider current ideas and rethink the familiar. Hongbo loves playing with ambiguity. Land of Fairy Tales features an imaginary map of the world where continents are constructed from layers of paper meticulously glued together in a honeycomb-like structure by hand. Each structure can be laid flat, twisted or stretched. This beautiful large-scale installation of colourful malleable continents subtly reflects the geopolitics of borders and boundaries as active forces and resources in international and domestic political, social, and economic relations.

Eccentric City is an imaginary floating city that is constructed of tatebanko or Japanese paper dioramas. This traditional Japanese craft, popular in the late Edo period (1603–1867) and the Meiji period (1868–1912), has continued to fascinate Keiichi Tanaami. He subsequently introduced tatebanko to PHUNK, a Singapore art and design collective, for this collaboration in 2010. The cityscape, populated by PHUNK’s black-and-white carnivalesque theme-park universe on one side and Tanaami’s brilliantly coloured psychedelic dreamscapes on the other, portrays the pulsating energy of urban living. These images are somewhat autobiographical. For PHUNK, amusement parks afford relatable childhood memories, while Tanaami's brand of psychedelia can be traced back to two formative periods in his life: the witnessing of the firebombing of Tokyo during World War II and his four-month stay in hospital while recovering from pleurisy in 1981, marked by nightly hallucinations from the strong medication.

100ish Meaningless Statements is a collection of around 100 sentences that meditates on, explores, and subverts the uses and functions of paper in our lives, as well as the various meanings ascribed to it. As text, it conveys a whole spectrum of meanings and provocations to the reader—from nonsensical axioms and philosophical questions, to pop cultural references, commentaries on social relations, and instructions for creative responses. The text positions paper as material, yet also imbues it with personality and voice, giving it agency and allowing it to turn its gaze back onto humanity and society. In 100ish Meaningless Statements, paper also becomes a placeholder for the self: full of randomness, emotion and life. It moves us towards a possible future of what “paper” can be, limited only by the imagination.