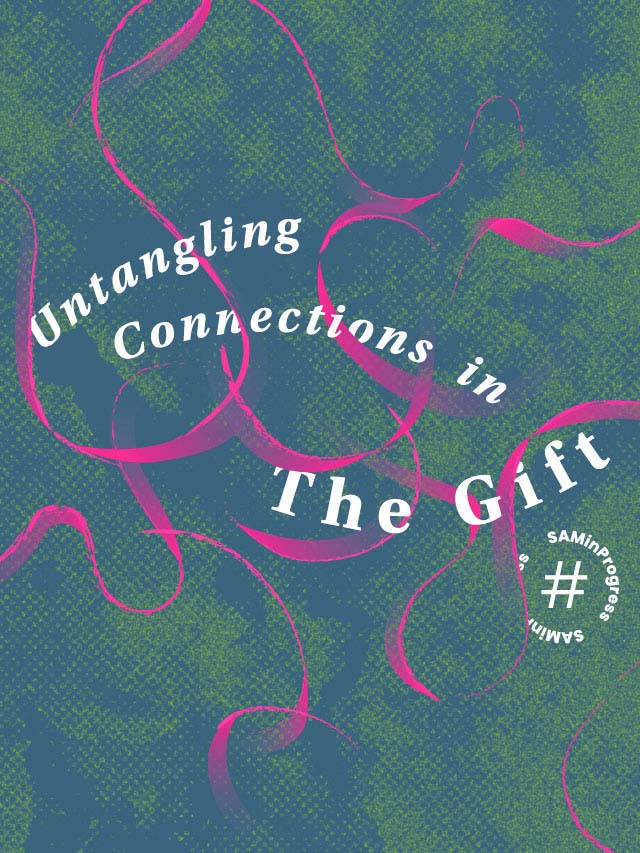 Untangling Connections in The Gift

A gift is not just an object, but also intrinsically bound to relationships between people and ideas across spaces and time. This is the subject of The Gift, which unwraps the complex web of relations, influences and exchanges behind the seemingly ordinary act of gifting. Here are three sets of artworks and artefacts in the exhibition that showcase the interwoven histories and relationships they contain. Invitation card for a 1991 exhibition of works by Joseph Beuys and Käthe Kollwitz at the National Museum Art Gallery.
Courtesy of Koh Nguang How Archive

A key artist in The Gift is Joseph Beuys, who was well known for expanding the definition of contemporary sculpture and art. But it is not the first time the German artist’s work has appeared in Singapore. In 1991, a touring exhibition of Beuys’ work was showcased at the then National Museum Art Gallery.

Joseph Beuys: Drawings, Objects and Prints was captured in photographs by artist Koh Nguang How who was then working at the gallery. Amongst his many photos include one of Singapore artist Tang Da Wu in the audience. Tang was familiar with Beuys’ work and incidentally organised A Sculpture Seminar during the same period. The art show is now regarded as a seminal exhibition in Singapore art history with works that transgressed the conventional forms of sculpture. 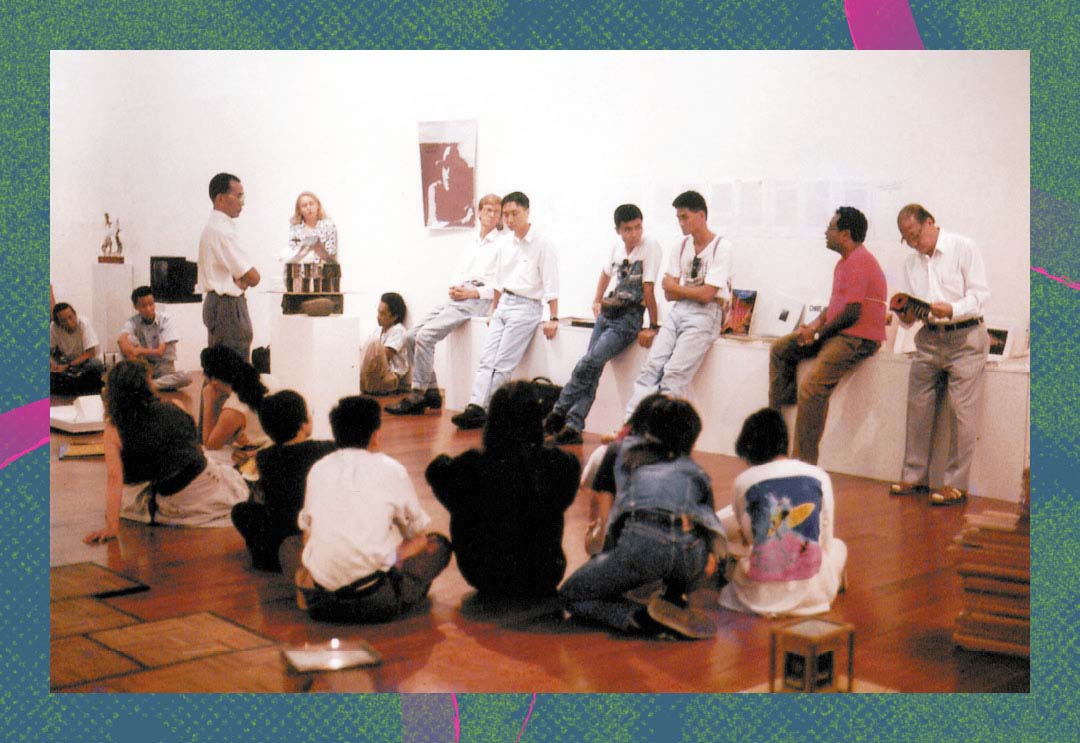 A public session during A Sculpture Seminar (1991). On the wall is a poster advertising Beuys’ exhibition at the National Museum Art Gallery. Courtesy of Koh Nguang How Archive

“It is from Koh’s photos that we are able to picture, not merely the occasion of this event, but also read (and reread) the connection between geographies and artistic practices, as well as consider these intersections and their treatment comparatively across time,”1 writes curator June Yap in an essay for the exhibition.

The congregation of artefacts and art involving Beuys, Koh and Tang reminds us of how Singapore’s contemporary art scene today evolved from connections made in the past and with artists beyond its shores. 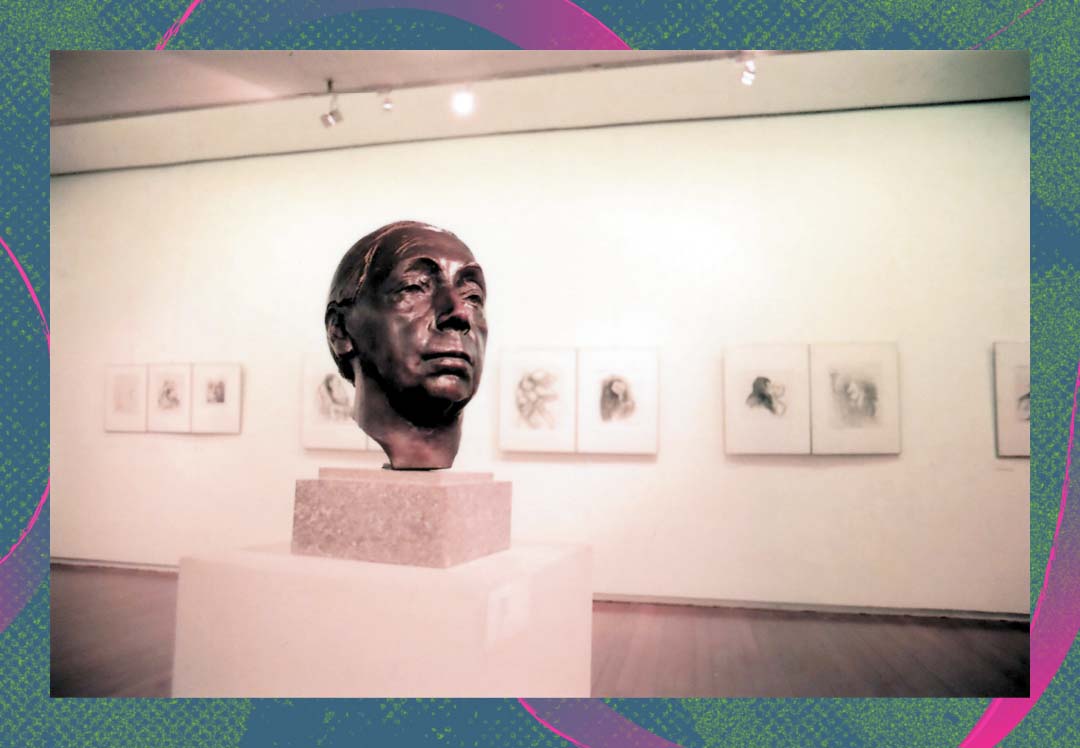 A sculpture of Käthe Kollwitz at her 1991 exhibition in the National Museum Art Gallery. Courtesy of Koh Nguang How Archive

Another kind of exchange exhibited in The Gift is one of shared aesthetic and subject. There is a photograph of a sculptural depiction of the late German artist Käthe Kollwitz taken during her 1991 show National Museum Art Gallery. Kollwitz was well-known for her sensitive yet expressive representation of the struggles and lives of women and the working class, which can be seen in an artwork by Indonesian sculptor Dolorosa Sinaga. Solidarity (2000) consists of seven female figures with hands interlinked, and a single clenched fist raised to the air. It was inspired by the tragic May 1998 riots in Indonesia when hundreds of people were raped and killed in an organised campaign of looting and assaults. The mobilisation of the body to perform meaning can also be seen in Holly Zausner’s Second Breath (2005). The 10-minute film shows her interacting with three outsized figures in key landmarks around Berlin as if it was a stage. The movement of bodies serve as a metaphorical portrait of her time living and working in this historic city. It is also a re-enactment of the city’s troubled history as seen in the artist’s struggles to counteract the heft of these sculptures. In an exhibition essay, SAM curator Selene Yap writes about how both artworks can be read together as “discrete moments in each artist’s practice where the body and its choreography becomes an object of study”. She adds that, “Their approaches reveal relations between the body and politics, as well as articulate what moving bodies can accomplish to execute social change.”2

Finally, The Gift also explores connections beyond art through a series of books about the Tarim Basin, a cradle of ancient civilisations and situated along significant trading routes in Central Asia. In the late 19th and early 20th century, it became a hotspot for expeditions amongst the growing community of amateur archaeologists and explorers, including Sir Marc Aurel Stein and Albert von Le Coq. Both extensively detailed accounts of their travels as seen in these books that continue to captivate contemporary academics and practitioners. One of them is Professor Ho Puay-peng, a contemporary scholar who acquired the books during his travels. Books by Aurel Stein and von Le Coq at The Gift exhibition.

The books illustrate how culture is entangled with economic interest. All throughout history, trading routes were not just about economic exchange but also how cultural objects and knowledge were produced and transmitted.

Although the antithesis of the gift may appear to be the economic transaction, curator June points out in her exhibition essay that this is simply too reductive.

“After all, the routes of economic exchange have historically been deeply intertwined with cultural transmission and influence, where culture is often the reason for economic interest.”3

Untangle more connections between artworks, artefacts and the world in The Gift . The exhibition is part of Collecting Entanglements and Embodied Histories, a dialogue between the collections of the Singapore Art Museum, Galeri Nasional Indonesia, MAIIAM Contemporary Art Museum and Nationalgalerie – Staatliche Museen zu Berlin, initiated by the Goethe-Institut.

The exhibition for The Gift is also available at thegift.singaporeartmuseum.sg 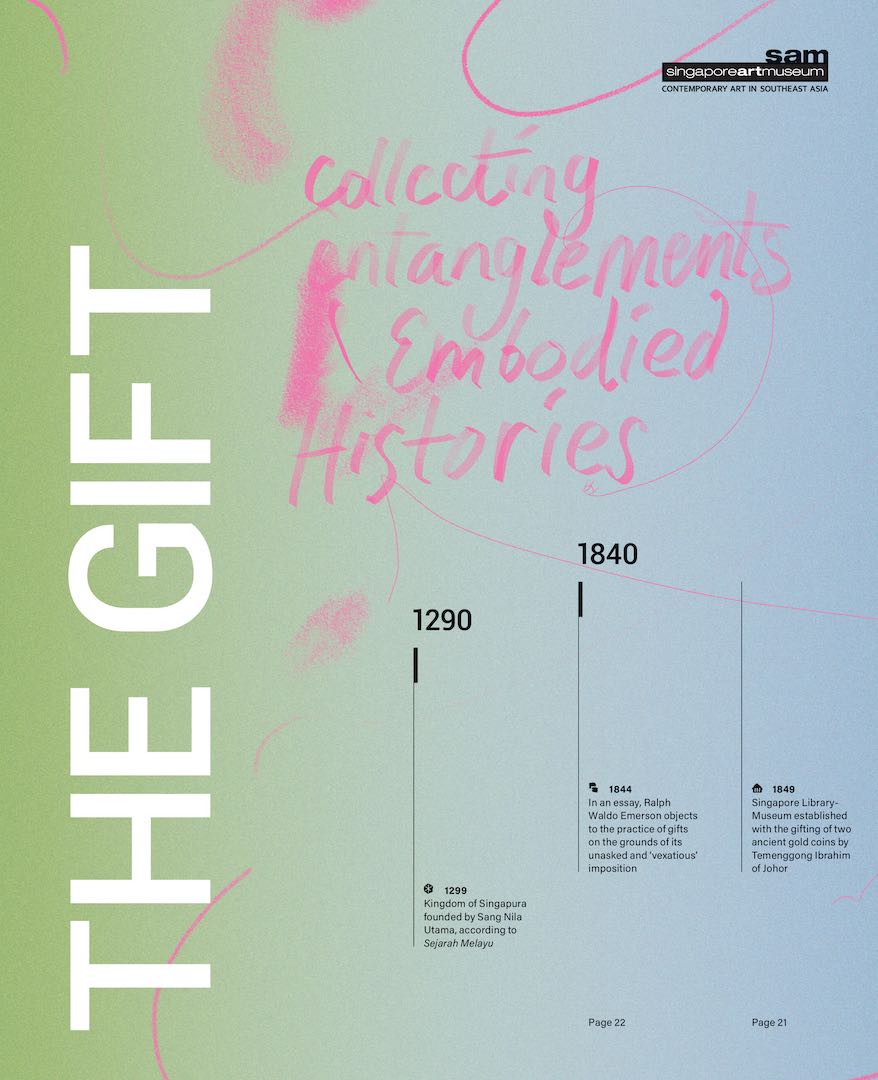 Cover of the exhibition catalogue for The Gift.