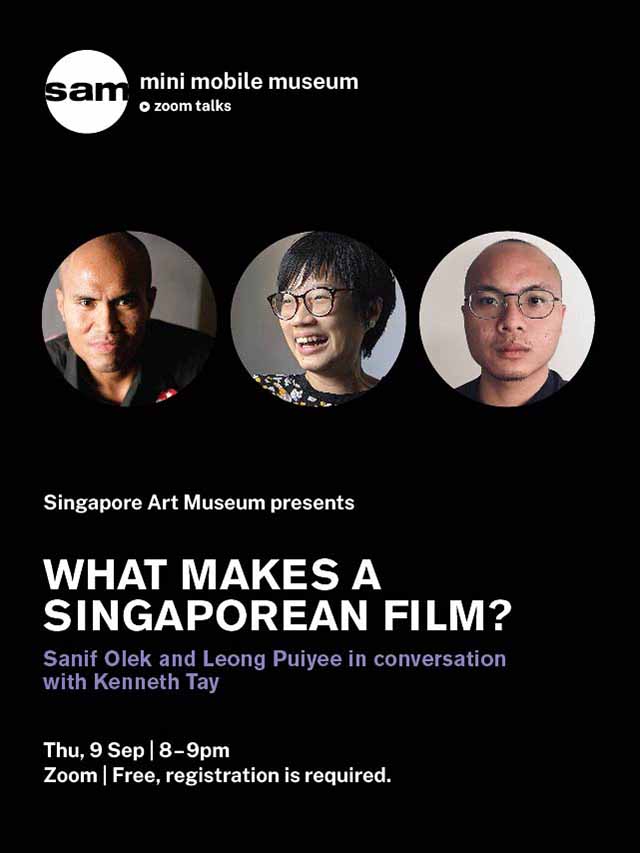 What makes a Singaporean Film?

How much do we know about our local films? Do they have a distinct identity? Join us in this conversation with director Sanif Olek and film programmer Leong Puiyee as they share their experiences in working with film and navigating the film industry in Singapore. The session will be moderated by Kenneth Tay, assistant curator at SAM.

This programme is as part of SAM Mini Mobile Museum. The current exhibition is Jeremy Sharma’s Slander! on view at Jurong Regional Library from 28 July to 12 September 2021. Click here for more information about the artwork.

Sessions will be conducted online via Zoom and are free with prior registration.

This programme is organised by Singapore Art Museum and in collaboration with the National Library Board.

SAM Mini Mobile Museum is a travelling art exhibition held in partnership with the National Library Board. The Mini Mobile Museum introduces the multifaceted nature of contemporary art through a selection of SAM’s permanent collection artworks, created and adapted for public non-museum spaces by Southeast Asian artists.

Sanif Olek is a Singapore-based director. His filmography includes television series, strategised messages for corporate organisations and commissioned works for statutory boards and museums. Acclaimed for this work across diverse television genres, he has received a Best Writing award and four Best Director awards for his drama series at MediaCorp Suria’s Pesta Perdana. His short films have also won international awards, garnering attention for their authentic Singaporean stories that address identity and ironies of the human condition. His debut feature film, Sayang Disayang, was Singapore’s official entry to the 2015 Oscars® in the Best Foreign Language Film category. It is now streaming on Netflix in Southeast Asia, Japan and Korea.

Leong Puiyee oversees the film programme and projects at Objectifs. She has managed numerous film events including the National Youth Film Awards, cINE65 Short Film Competition and the Singapore International Film Festival from 2014 to 2019, where she supported Southeast Asian filmmakers through the Short Films programme and Singapore Panorama section. Leong has been invited to be on the selection panel of SEAShorts Film Festival in Malaysia (2017 and 2018), Asian Film Archive — Singapore Shorts (2018) and the World Press Photo Digital Storytelling Contest, Long category (2020). She was also part of the 2020 Busan International Film Festival pre-selection team (Short Films), and the 2020–2021 Bangkok ASEAN Film Festival Short Films selection team.

Kenneth Tay is an Assistant Curator at Singapore Art Museum. His research and writings span media histories, global infrastructures, and urban spaces, but he is broadly concerned with the mediation and performance of the "global". Tay is the author of The Sea is All Highway: Singapore and the Logistical Media of the Global Surface (Temporary Press, 2019), and has curated projects including FLAT.SPACES (2018) and CONCRETE ISLAND (2016). He holds an MA in Media Studies from The New School, New York, which was made possible through the support of NAC Arts Scholarship (Postgraduate).